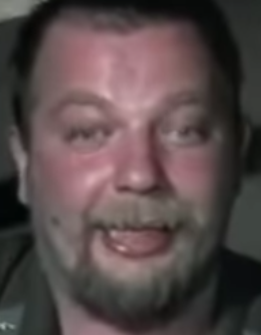 "Hey bro, you want some sweet bread that I made myself?"
"what the hell i never asked for this"
—porkyThegrumpiest''
Advertisement:

porkyThegrumpiest, also known as devlin_76, or Gary, is a 19 years old introverted Hikkikomori, disgruntled hedgetrimmer, advocator of Wikipedia-style writing, opposer of first-person writing, Word Cruft regulation-type editor, worker at TIFRURJALM, and is definitely not the sharpest tool in the shed.

An ex-lurker who decided to become a contributor in 2013. He appears to have disdains for something that will not be discussed on here, this is because he saw it as something he calls "big brother-esque rule", as he put it. He is also somewhat critical when it comes to Word Cruft, and seek to rewrite many entries "for the better of TV Tropes". He does not appreciate misuse of Nightmare Fuel, and this is because he thinks he is not "thin-skinned" like the others, though he is not unlike them.

He is a fan of Kamen Rider (particularly Den-O, mainly due to its light-hearted nature), PAYDAY 2 (Fo'sho!), Touhou (started out from music from Super Mario World ROM hack and fanart he finds on Image Booru), and later The Idolmaster, among other things. He also appears to be something of a Cloudcuckoolander, if not for his schizophrenia and his weird (and often depraved) antics. Despite this, he is capable of holding an online conversation, as long as he didn't lose his mind long enough.

Online, he appears to be friendly and civilize, although he is not about calling people out for their bullshit, and can be somewhat vocal when it comes to expressing opinions. He can be a something of a mood-swinger and a bit unstable (and possibly anticlimatic) in real-life, though.

Fun fact: His TV Tropes handle is a reference to the trolls' online handle, at the time when he was a fan of Homestuck. He now prefers to be called by other names.

Feel free to write something on his Troper Wall.

Currently, this page is still work-in-progress. Expect more content to be added soon... or not.

open/close all folders
Tropes that may (or may not) apply to him
Advertisement: