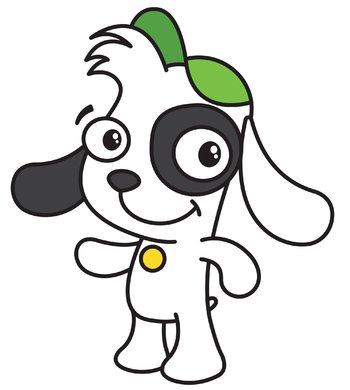 You have now been blessed by the magical dog of discovery.note Pictured above is Doki, the former mascot of Discovery Kids in Latin America.

Hi, I'm Damien Maymdien. Now, I know what you're probably thinking and I've heard it 100 times. People come up to me and they say, "Damien, why is the world so dumb and stupid?"
Let me give you a "for instance". Some girl, let's say her name is Sarah, is walking along with her #2 pencil facing upwards. Then, she trips over her shoes and that #2 pencil goes right through her eyeball and into her brain, and now she's eating applesauce through a straw the rest of her life.
...
Now, what was your question again? Oh right, the world is stupid. Want some bagels?
...What?
I sell bagels now.
Okay, cool, but I don't want any bagels, I just wanna know why-
Try some bagels!
I don't want any bagels.
Don't be a jerk!
A jer— I just want answers!
What have you got against bagels?!
All right, fine! I'll take a dozen bagels, too, okay?!
Great! But the bagels won't be ready for an hour.
GAS BUBBLE!

So why is the world so stupid? The reason is simple; The academic level of this cul-de-sac is dropping like a lead weight! If we don't provide ourselves with some kind of mental stimulation, we'll all be reduced to protoplasm! Look around you! Our break from school has turned us into lumbering, nonsensical ninnies! My apologies for being so blunt.
So what you're saying is... you're a dork?
GAS BUBBLE!

am bad at introductions
Anyway, I am a Troper. I joined this site because I wanted to fix some pages for some of the more obscure shows I like
And that's it. That's all I got

works i am fixing
So here's a collection of work pages I made pretty big contributions to, usually because I like them. You (the reader) are also free to help out if you know anything about these shows.

here's some tropes i guess

My Work on YouTube (and the Vanity Plate)
Oh yeah, I also have a YouTube channel for another passion I have. It's right here.

My So-Called "Art"
I also have a DeviantArt account

. Don't worry, I'm not one of those guys who paste poorly drawn feet on a PNG of a cartoon character; I'm slightly better than that. They're all pictures of Pokémon, by the way, so if you don't like Pokémon, uh... close the folder.

Here's a rock with a plaid shirt.    That's stupid. Everything is stupid.