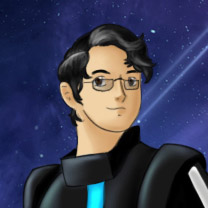 ...And, no! I can't breath in space, in case you were wonderingnote Profile image kindly provided by my brother. Thanks, bro!
Advertisement:

An outlandish yet polite lurker who found TV Tropes some time ago, and he quickly grew to love it. Nobody knows exactly what his deal is, and he likes it that way because of his extreme shyness. (and paranoia) However, he's also a pretty straightforward and amicable folk, so, if you got any questions for him and/or you just wish to approach him, he will be glad to share some things with you. (not everything, though, because only opens completely to a very limited number of people)

He used to be the unofficial guardian of the "Playing With" Sub-Wiki, which was also one of his favorite sections around TV-Tropes. (It's a great source of ideas and inspiration) He watched out for both the format/style, as well as for the congruency/ingenuity of the entries.

Around the start of December 2012, he initiated a harrowing self imposed crusade to bring the Standarized Playing With Wiki Template to each and every single page in it

... And after 2 months, and more than 3,000 pages later, he has finally achieved it! (It's his personal TV-Tropes' related CMoA, if you will)

At the star of February 2017, he finally stopped caring about maintaining the sub-wiki... both due to personal

, and the realization he longer cared about performing an ultimately thankless and pointless duty that would be best suited for an automated script.

Tropes that apply to me

This Troper has examples of:

Favorites (Both media wise and "miscellaneous")