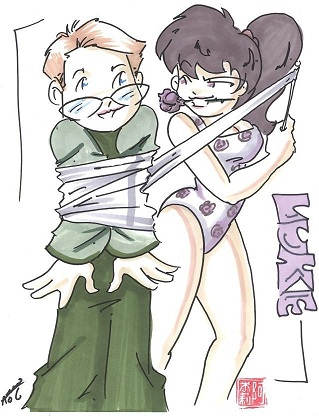 Fanfic Author, former English and Geometry Teacher, Self-Published Novelist, Self-Promoter who is, nonetheless, yet to seriously look into a literary agent for his novels. I've sent novels and manuscripts to dozens of agents the last year and a half, but always feel like I could do more.

From the Author: This is written in first person so that people can be aware that I wrote it about myself and thus be aware that this is a personal view.

If someone else writes something about me, I'll leave it untouched, but I want my statements recognized as my statements. At least on my profile page. I want people to know that I said it and it isn't just something guessed at. Whether a particular comment is seen as positive or negative, I don't want there to be doubt on this page as to what is something that I've said about myself.

Also note, I tend to use sites like this as sounding boards, hence why there's a lot of cases where I've troped myself or my works. Even before discovering T Vtropes.org, I found it was a good exercise to take a look at my own works and self and thus take an accounting of the sort of things I am prone to do. I can then make an informed decision of whether or not I wish to continue in that vein or if it is something I am not happy with.

Read this page as a sort of me talking at myself rather than other people. I'm not trying to tell people how great I am. I'm trying to get a reasonable look at what exactly I am and what I do.

I do use it for promotion, being a shamelsess self-promoter. I say shameless, not really true, I don't enjoy promotion. I don't like the fact that some aspect of me now sees my fanfic as advertising for my original stuff. But I sort of have to promote myself since there's currently no one else to do it.

Note to would-be self-publishers: realize, agents do not like to deal with previously published materials.

If you are self-publishing seriously, be prepared to arrange your own events and spend an hour or more a day trying to find ways of spreading awareness of your stuff. All the advice I have from professional writers says not to wait until you're popular to run book signings and the like. Those book signings are to make people know you exist.

Because unless you start doing well, the fact that you self-published a particular book means you are likely to have to keep self-publishing for a long while yet.

I have written several original works including:

I have developed and runs game world settings for various conventions including:

And an adventure set in the Bystander world as well.

Two of those fanfics are troped by me here Divine Blood, Chi and Chakra and he started the DPRagan trope page as well.