"Who needs stealth when you have a tactical nuclear catapult and plenty of beer?."
— Me discussing my usual answer to combat. 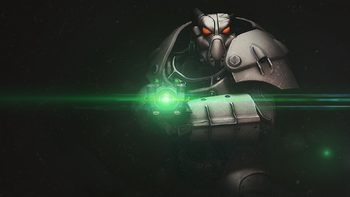 Hey everyone, I'm The Silver Shroud. I've been lurking on this site since around 2013 reading about various works of fiction and their respective tropes. I decided to properly make an account on March 12, 2017. In general, I like anime, movies, cartoons, and video games.

In case you were wondering, my name comes from the fiction superhero in the Fallout universe and more specifically, Fallout 4 where I made a Silver Shroud build and delivered justice from Far Harbor to Nuka World. My favorite build is my Brotherhood of Steel heavy weapons/explosives build with the Nuka-Nuke Launcher and Death from Above being my primary weapons.

Things that I enjoy: