Now I have a Troper Wall for you people to be completely oblivious about and never post on! 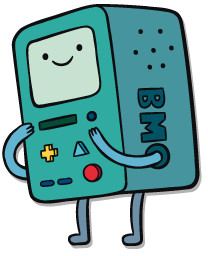 If this were a real attack,
you would be dead.
Advertisement:

I have no sense of self-restraint, so my page is freakishly long and only getting bigger as I add whatever comes to mind. To help you navigate it with your Puny Earthling mind, I have included the following navigation aid. Just click on any link and you will be magically whisked away to whatever section your heart desires. As long as your heart desires the section you clicked on.

Please note that the navigation links are all Red Links due to a system bug, but they work just fine.

I've been a contributor since August of 2014, though I've been lurking on the site for hours at a time practically since its inception.

I exist on DeviantArt as Solipsism-Syndrome

, and I am also on FanFiction.Net as The Great And Powerful Keski

. (I haven't been active on either site in a very long time, but there you have it.)

I have always been firmly seated in the realm of Speculative Fiction, but over the years I have shifted from a strong preference for Fantasy to a strong preference for Science Fiction - the harder the better. Ten bonus points to Science Fantasy, and a billion points to any work that purports to be fantasy but Genre Shifts into science fiction, or turns out to have been science fiction all along. (Scrapped Princess and The Second Apocalypse are two shining examples that each get a billion and ten points for being all of the above.)

Fifty negative points, though, to works that Genre Shift in the other direction. I'm looking at you, Alias.

I am not to be confused with that other thing my name coincidentally rhymes with.

This paragraph serves no rhetorical or informational purpose, and exists only to pad out this portion of the page, so that the picture of BMO won't overlap annoyingly with the next section, since the rest of the page consists of bulleted lists (although some of the bullets are full paragraphs, especially once you get down to the lists of my own works and tropes that commonly appear in my works. Nonetheless, the rest of this page, after this paragraph, is in fact bulleted lists. Well, and a couple of numbered lists peppered throughout, for sequential items. And a couple of horizontal bars). I suspect I have enough Filler now, so I'm going to stop typing.

I decided I didn't have quite enough Filler, so As You Can See, I'm still typing. Or rather, I'm typing again, and from your perspective I've probably been done typing for quite some time; and in fact, from a non-linear, non-subjective viewpoint, time is just another spatial dimension that we are evolutionarily unable to perceive as anything other than a linear, one-way progression (which is why we are capable of "looking" and "moving" in one direction only—respectively backward and forward (from an individual perspective, of course)), which means verb tenses are essentially pointless from an objective perspective, and it only bears saying that for a specific period of time with set bounds, which we shall call Tx:Ty, I type the material on this page (well, I didn't type it all in one sitting, i.e., period, but you get the idea), and for another specific period of time with set bounds, which may or may not have (and is astronomically unlikely to have, but could still technically have) the same bounds, and which we shall call Ta:Tb, you read said material. And if spacetime is closed, that means in a sense, you have already read it, are reading it, and are about to read it, all at the same time. Which doesn't exist. Sort of. But now I'm pretty positive I have enough Filler, so piss off and go read the rest of the page.

I contain examples of:

Tropes I Have Provided Examples Of... Whilst In-Character:

My Favorite Tropes (when done well):

Tropes common to my work includenote I may start putting up pages for my Fan Fics and Roleplays, but for now you'll just have to Take My Word For It that this stuff exists somewhere. I will cite from roleplays (but only tropes that I used, not ones only used by other players), fanfiction, and original fiction.:

My works include (This section is a work in progress. Note that most of this can be found online. I'll provide links later.):

)note Most of these are Dead Fics. The Legend of Zelda: Finality and Ace Combat: Restitution are the only completed stories. Finality is a Short Story with a Sequel Hook, while Restitution is four chapters long and straddles the line between Short Story and Novella.

My Favorite Worksgratuitously-long explanatory note Works are sorted as follows: First, by medium, which are alphabetized. Within media, works are sorted alphabetically by title, except when a number of works are grouped under a single creator, in which case they are alphabetized by the creator's family/surname. (One major inconsistency is that, within creator groups, works are either sorted chronologically or alphabetically by the work's name, with no real pattern for which is which. Eventually I will sort them all chronologically.) For example, under Anime, Tokyo Godfathers is listed under "K" for Satoshi Kon, so it comes before Legend of Galactic Heroes, which is listed under "L" for its own name. But Monster comes after Legend of Galactic Heroes, because it is also listed under "M" for its own name. There is no real reason for this haphazard, arbitrary, and inconsistent sorting convention, except that I prefer to keep works by my favorite creators together because that's how I think of them. I don't think of them as Battle Royale and Kill Bill and Inglourious Basterds and Reservoir Dogs—I think of Battle Royale and "three(ish) Tarantino films".:

Mildly Amusing Things I've Said and/or Heard and Decided to Collect and Post Here in a List:

SolipSchism: [to Scorpion451] I hate you so much it loops around and becomes love.
SolipSchism: [Opinion about whether a trope applies to a Pokémon]
Larkmarn: Yeah, ditto.
SolipSchism: I seem to remember reading somewhere that the rate of reproduction on Earth is so great that at its current rate, if you lined everyone on the planet up single file and marched them past you, the line would literally never end.
Bocaj: I know lines are boring but the answer is not lots of casual procreative sex
SolipSchism: Wait. Wait. Isn't Dalekanium the unbreakable alloy Dalek casings are made of?
The Unsung Bard: Don't know if I'd call it unbreakable seeing as New Who has plenty of Daleks getting blown the fuck up.
SolipSchism: Because according to "Day of the Daleks", "it's a highly effective type of explosive."
The Unsung Bard: Maybe it's more volatile in an unrefined state?
SolipSchism: Fridge Logic: Maybe that's why they're so unexpectedly good at getting blown up. They make themselves out of BOMBS.
[In the "Corrupt-a-Wish" Forum Games Thread]
Miscellaneous Soup: I wish that the next poster was a weasel. They will not bite me or harm in any physical or mental way. That includes paying someone to kill me or harm me.
SolipSchism: Granted. I get into your pantry and eat some of everything, scattering the rest all around the floor; then I chew up the cushions on your couch; then I shit on the couch and pee on your coffee table. Then I turn into a weasel and leave.
Miscellaneous Soup: XD XD XD XD XD XD XD XDnote Actually, the "[lol]" laughing-face emoticon was used, but that doesn't work here, so I had to make do.
[On Facebook]
SolipSchism: Got a fortune cookie with no fortune in it. So, does that mean I have no future? Like, I'm going to die soon? That's dark, Panda Express. That's really fucking dark.
Shawn: Or maybe yours is a future that cannot be predicted.
SolipSchism: I AM THE KWISATZ HADERACH.
SolipSchism: [speaking about my boyfriend] I feel like I'm describing an adorable little baby except it's in its late 20s and I want to have sex with it.
Brahian1: [referring to ninja posters; see the paragraph near the bottom of Ninja Editor] holy fuck thats a lot of ninjas
Ghost Elm: Famous Last Words

And Now, The Best Pun Ever

"Plateaus are the highest form of flattery."

In the month of July, in the year 2015, I was struck with an inexplicable compulsion to start writing a bizarre story based on TV Tropes. The story is written in anachronic order, and it's entirely possible that the "Chapter" Things don't even take place in the same continuity, and yet they are all related—they are all a part of the story.

Here's what the critics are saying about Whatever This Story Is Called:

Death Vlk: I DIDN'T READ YOUR STORY BECAUSE IT'S TOO FUCKING LONG
Death Vlk: Well apparently I've died a horrible, slow and painful death after engaging in some massively OOC dialogue so like...I don't have an opinion.
Death Vlk: I approve of this rewrite. This is IC enough for a good fiction story.
Death Vlk: Solly, I politely request you give my new body a John Waters mustache.
Death Vlk: It will add to my character.
Oh Boy Time: A fine job for a slightly above average hoe.
Inhopelessguy: oh
Inhopelessguy: my
Inhopelessguy: fucking god
Inhopelessguy: holy shit
Inhopelessguy: I WANT FUCKING MORE SILKYDAD HOLY SHIT GIVE ME MORE
Inhopelessguy: ...quite possibly the most concise definition of the Tree.
Inhopelessguy: This is beautiful.
Inhopelessguy: Thank you, father.
Brahian1: ill just bookmark it and then never actually read it
Baron Green: Wow, Solly, that was quite a tale. Also really well written.
electronic-tragedy: It was an interesting read to say the least.
Ozbourne: Do I even want to know what I am in this........ whatever you're talking a[b]out thing is
Ghost Elm: That... was amazing...
Lior Val: I'm too focused on Mass Effect to read this.
Lior Val: Sorry Solip, but Wrex and Garrus are more interesting.
Lior Val: I demand to be a mad scientist if I am ever in this story.
William Radar Storm: Am I correct in assuming that I am not in the story?