"But then, my stupidity is probably legendary at this point..."

Scooter007, posting a reply on the You Know That Thing Where... 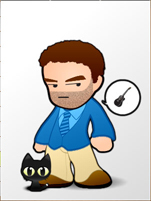 Yes, this really is an accurate depiction of me.
What to say about myself? I'm a middle-aged male, living in the Mid-Western United States. But enough about me!

Like many other contributors here, I fancy myself a writer. In fact, for me the biggest appeal of this site is the familiarity of so many tropes — not because I've seen them, but because I've used them myself (see below).

Ever since my first appearance here in late June 2007 I have spent much time poking around, familiarizing myself, sticking my two cents into discussion threads where it's not wanted, and occasionally launching actual tropes — although these days I'm mostly content to add Works/Creators pages and an ocassional Recap.

The background I bring to my contributions is that of a Speculative Fiction geek (Science Fiction or Sci-Fi for those less "hardcore", like me), big 70s/80s music lover, B-Movie nut and classic television fan. Newer TV/music, not so much, but still there. Oh, and a huge fan of Mystery Science Theater 3000.

Generally a Splitter, but I've drifted toward Lumper during my time here; something of a Grammar Nazi, and very much a Serial Tweaker. A firm believer in Bizarre And Improbable Giraffe Herding Techniques and the Rule of Cautious Editing Judgment; and I do tend to be somewhat snarky and cynical most of the time. I do it for the bragging rights and a sense of personal satisfaction.

I launched the following tropes:

I also fired off the following Works/Creators pages:

Fleshed out the descriptions for:

Provided pages for these MST3K films:

Just For Fun: Tropes I Use:

As stated, I am an amateur writer, having co-written a collection of not-entirely-serious adventure stories centered around a team of super-powered/high-tech government agents. The no-doubt innumerable tropes which we have employed in these stories include (but are likely not limited to):

All this, with the local citizenry being none the wiser. Handwaved in one story as the city-dwelling locals being too consumed with their own day-to-day lives to notice.