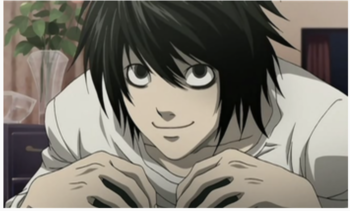 I accept cake as payment
Hello! I'm STARCRUSHER99, named after the first gamertag I had on the Xbox 360 that came out of the random name generator. My fellow tropers tend to just call me STAR. That's me over on the right.
Advertisement:

Well, not quite, but it is my dream to one day play him in Death Note: The Musical, cause it's quite frankly a much better show than it should be.

I'm a second year college student studying music education and musical theatre, so perhaps it's not a surprise that Tv Tropes has ruined my life. I'm often characterized by my sudden and extreme obsessions (which this website has decidedly not helped), which changes on pretty much a monthly basis. Offhand, I've gone through phases of Star Wars, Lost, Assassin's Creed, Death Note, Minecraft, and Halo, and quite frankly I'm on the verge of falling back into any of those obsessions at the drop of a hat. Currently, I'm back on Lost.

I'm also a frequent contributor on both the Complete Monster thread

and the Magnificent Bastard thread

, though I've admittedly not been on either thread for long; my shtick appears to have become potholing names, as I've potholed more entries than I've proposed. I take those threads seriously and try my best to not annoy anyone on there through idiocy or badgering. Plus, I've rather come to enjoy most of the people in there, so come at them at your own peril.

I'm also a fan fiction writer under the same username as this site, but I haven't updated in years due to extreme writers block, growing up, and college. I hope to get back into that in the near future, as writing is one of my passions and I hope to pursue it professionally, meaning I need to get my ass in gear.

Tropes I Believe Apply To Me
Advertisement: