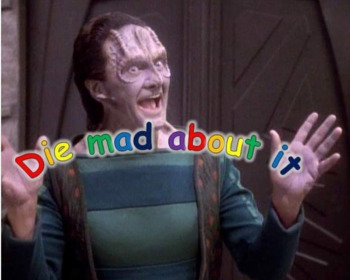 If you don't, then who will?
I go by Riley here, though I've gone by many, many names elsewhere. I'm a nerd with a passion for creative writing and a hope to pursue writing professionally and become a novelist. However, I've got a long way to go. You can generally find me wherever there's fantasy (In two main flavors!), Power Metal, John Milton, and the average overly-elaborate Gambit Pileup.
Advertisement:

I'm also the curator for the Magnificent Bastard "So You Want To" page, as I have been for a while.

I go by SolidSocialistShiba on Archive of Our Own, and all my works can be found here

, though much credit for the others is owed to my partner BumbleCade. We typically write fanfic of She-Ra and the Princesses of Power (Typically with a focus on my goth boy Hordak) but I personally have also dabbled in other fandoms, most notably striking latest with Destinies of Remnant, a What If? anthology set to go eight chapters.

I have a certain fixation on tropes— particularly Villain Tropes. More on them in the folders below. I like to think of real life in trope terms as a coping mechanism for my anxiety.