I have work on Mondays to Thursdays. Due to a lower workload, Fridays are likely free, but I'm also probably going to be part of an online college on weekends. I'll still try to make edits daily.

If I don't edit for a month, I give full permission for the administrators to put all my to-do list items publicly in a document or something so the content does not go to waste. 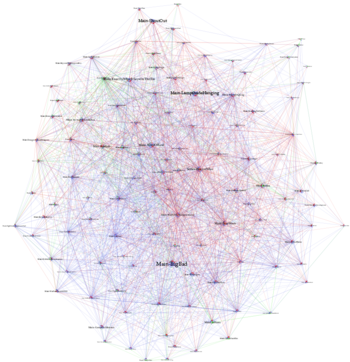 This is how complex the linking system was between 23‱ (basis point, 1/10000) of TV Tropes in 2011. I'd argue this is less than 9‱ of TV Tropes now.
Advertisement:
"It doesn't matter whether a cat is black or white, as long as it catches mice."
— Deng Xiaoping

Hello, this is Piterpicher. (call me Piter if you want to, but I won't try making shorthands of your name unless you leave it somewhere clearly and agree to use them, though I may skip numbers or use initials) (Formerly known on primarily Flash gaming websites as PITERPICHER3752 reason for change I realized the numbers aren't necessary, they're not even an interesting sequence like 3141, but I haven't known about it back then, and ALLCAPS can look tacky, like in the early Pokémon games, but I don't use most of those sites anymore and matured since then) I am an autistic young man from Poland and a gamer, troper, an employee elsewhere, general weirdo, and game designer... eventually.

After a year of lurking (or possibly more? I still remember how this site looked like two major updates ago), I've joined this site on 03.05.2017 (that's the 3rd May Constitution, if you're in Poland, so it's twofold significant for me). Why did I join? Because there was misinformation that Five Nights at Freddy's 4 is the final Five Nights at Freddy's game, when Five Nights at Freddy's: Sister Location was out (though at that time, I was kinda interested in it, I don't even care about it nowadays). And yes, I became addicted to it like everyone else.

My role in TV Tropes? I'm a materialistic inclusionist, always looking for new stuff to add to the wiki or improving what already exists. Adding examples, adding example context, adding images, adding indexes, adding videos (until I mostly stopped because my computer's a bit too crap for it), adding whole articles (though I was never into adding quotes or potholes). I don't get people who specifically like to delete for their subjective quality reasons. I like to get rid of objectively underperforming crap, like works with no tropes and tropes with not enough wicks. Other than that, I'm generally a "blue ocean strategy" guy, who makes pages and edits to improve coverage on stuff that's lesser known or does not appeal to the current status quo, as I believe that TV Tropes "no notability + humorous and quick way to deliver info" build is useful for it.

That said, I am also active on forums related to the wiki, less on the forums that are just for the forum, I don't give attention to them after early 2018 because I kinda think they waste server space, though humorous side content is important. I may have posted something on the Just For Fun or Media forums, but it's usually to show my signature when it's important for the former or ask a question for the latter. I used to post in Image Pickin' a lot, but eventually quit due to it just no longer feeling like it's good to participate or particularly effective. Ever since I left, I have posted a few. times, mostly out of something that just didn't feel right and I saw on the home page. Now I actually prefer working for the Trope Repair Shop, where contributing is more useful and also more objective. For specific contributions, see the "Achievements" folder below.

Based on Troper Types, I believe I'm an Eclectic Troper. That's one of the few Just For Fun pages I actually think are interesting, plus Trope Kilowicked, Surprisingly Has a Page, The One With…... I might have softened up on those, but still use a small portion of them.

I can speak and write in Polish (native), English (highly advanced, with my greatest achievement being the fact that I freaking ACED the base and extended high-school English exams), and German (lower intermediate, had the "satisfactory" grade on my high-school report card). My knowledge of French, Russian, and Japanese is nothing to write home about.

In terms of Myers–Briggs, I'm a Logician INTP-T, based on the 16 personalities test. Also a 0 on the Kinsey Scale of Tropes. I find The '50s, The '80s, and Turn of the Millennium to be the most appealing decades, even if I only got to live in the latter.

If you're wondering how to pronounce my nickname, I generally say it like Peter-Pitcher... But I guess Peter-Picker isn't really wrong, either.

As you can see, one of my biggest flaws is thinking I can take on something big, and leaving it 50% done. Hope that I can change it to 60% someday, though.

I've put these paragraphs in the wrong order, but I don't care about that anymore.

This editor is a Veteran Editor III and is entitled to display this Silver Editor Star. (Image by Herostratus

I've done over 16000 contributions and been 3+ years on this site. (Image by Jkudlick

I consider my work on TVT to be quite prolific since my start. I strongly believe in inclusionism and want the wiki to be as big as possible (We shall reach 1000000 articles eventually). That said, I am not afraid to make changes to existing content as well.

I've been continually improving my work. I admit that the pages on the original version of this list were mediocre at best, in theory being good enough for wiki standards of 2017 but that was a relatively unpolished time. I also tried to inflate page counts of namespaces, which was ultimately successful. These pages should usually show my level of understanding of this website.

Personal notes for myself, based on my past mistakes on TV Tropes (can be used as advice for yourself, too)
As you can tell, despite all my achievements above, I'm not perfect. No editor is. The thing is, you should look back at your (and my) mistakes and not commit them again.
Tropes that apply to me
Tropes are not supposed to apply to real people, but many other tropers have lists of tropes that apply to them, so eh, I don't care that much.
My experience with insomnia
Ever since I started working, I had sleeping problems. This, compounded by the fact I have to awaken at 6:30 AM and have college on weekends is probably the only thing I hate about working. This folder is mostly a guide and experience regarding my sleep difficulties and does not qualify as medical advice.
My "Lenient Bonus Level" draft that was discarded, may try it again
TLP Note: Rolling Updates The shockingly easy Secret Levels some games have. They exist so the player can relax after a difficult game, enjoy the scenery or music, or just feel satisfied. Basically, if you can get to this level, you deserve something enjoyable to play through as a reward. Examples of this trope are almost always Breather Level.

Compare with Bonus Level of Heaven, since LBLs don't need to be set in Heaven, and BLoHs don't have to be any easier (in fact, they can be harder) than the rest of the game. Contrast with Brutal Bonus Level, the exact opposite.

Platform Games Indexes: Video Game Settings
Another unfinished draft I'll probably have no use for, at least right now
Rating Gate TLP Note: I don't know if this idea is perfect right now, but it is something seen in puzzle games and similar games often. May need a lot of questions regarding its scope, like "Should unlockable bonus levels count or only those that are deemed part of the main game?" Please tell me your thoughts and suggestions. Rolling Updates. If you don

See also Cash Gate, Fame Gate, and Forced Level-Grinding, other ways a game can block your progress, though those tropes use repeatable methods. May overlap with Easy-Mode Mockery if the game only gives high enough ranks on higher difficulties and Double Unlock .

Please note: The collectible variant of this trope requires one that is optional and which collecting by itself would not finish the level. Stars or similar things that need to be collected to unlock new levels in Super Mario Bros. 3D platformers for example would not count, as each one of them effectively counts as its own level or sidequest.

Now if you excuse me, I've gotta go, work and make the line go up some more.
Advertisement: