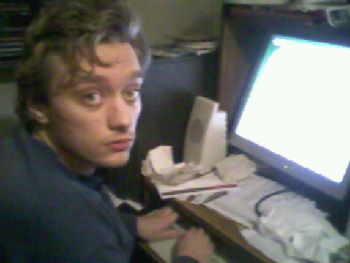 Look into those eyes. LOOK AT IT!
A dazed and confused Seattle-area college student.

I don't watch a heck of a lot of TV, and about the only scripted series I do watch at the moment is (and I'm ashamed to admit this) Professional Wrestling. I'm more than willing to spew my inane, annoying opinions, though, and I've caught bits and pieces of some others. Oh, and I can contribute to other sections.

(At any rate, I started here early enough that I felt a little bit intimidated by the makeup of some of the other contributors, who appear to be a lot more involved in TV than I am. Even now, it's not so much that I got more involved, despite starting a webcomic, than the wiki abandoned TV and more of the hoi polloi came in.)

I brought up YKTTW entries for:

and wrote: and completely re-wrote: and am the Trope Namer for:

Also, I once had delusions of becoming notable enough to get my own producer page, thus causing the same page to weirdly double as a producer and contributor page for the same person. But with the new Troper namespace, it appears that dream is forever dead...

For more about me, see my Wikipedia user page

Not to be confused with Morgan Freeman.