And those are my OCs' tropes

Shana is the younger twin sister of Shane.

At a very young age, Shana was bullied by the kids back on elementary school, because of her childish behavior and playing with dolls and never had any human friends. However, her twin brother, Shane was always here to protect her.

She and her twin brother, Shane auditioned for Total Drama Island because they would enjoy a summer camp together. Also, Shana would make new friends.

Shane is an expert on Kendo.

His oldest brother is the current heir to his family kendo dojo and began his training at age six.

He and his twin sister, Shana auditioned for Total Drama Island because they would enjoy a summer camp together. Also, Shana would have new friends.

Megumi
This is so exciting! Total Drama is my favorite show in the whole world!
Voiced by: Alyson Court
Teams: Team Victory, Team Amazon, Heroic Hamsters

Megumi is a girl from Tokyo, Japan, despite actually being born in Kyoto, who dreams of becoming an Idol Singer.

As a little girl, she dreamed to become a japanese idol because she watched them on TV. She moved to Tokyo to eventually pursue her dream. When Total Drama first aired in Japan, she and her friends in middle school, began to watch it. At one point, her father abandoned her and her mother when she was still younger.

Her favorite contestant is Trent, who Megumi has a crush on.

After auditioning for Total Drama Island and Total Drama Action and not making the cut both times, being part of Total Drama World Tour is a dream come true. Despite Trent, not competing on the season, she competes because of her love for music and singing.

Robbie is born to a family of doctors. However, unlike his family, he's a Mad Scientist.

His parents are doctors, and his twin brother studies so hard to become one, while Robbie himself, on the other hand, is a Mad Scientist. He won the science fair for the first time in first grade.

After auditioning for Total Drama Island and Total Drama Action and not making the cut both times, being part of Total Drama World Tour is a dream come true. During his time in the competition, he becomes closer to Shana, even though they were in opposite teams.

Kotone is a Miko, from Tokyo, Japan, who works harder and also excells both at athletics and academics, but has spiritual powers.

Richard is an shy and socially-awkward boy whose dream is to become a doctor, like his father. He's also the twin brother of Robbie, who participated in Total Drama World Tour.

Elena is a shy bookworm.

Kendall
Like I said, he's completely full of himself.
Voiced by: Cameron Kennedy
Teams: Pimâpotew Kinosewak

Kendall is an AI programmer.

An exchange student from Japan who moved to San Campion at age eight because of her father's job. She is also another of Ray's friends. She met Ray when he started middle school and became fast friends. Kiyo is a tomboy who often gets into fights with boys (except Ray and Gabe, whom she's friends with.) Upon finding out about Kaijudo, she eventually finds her affinity for Nature Creatures, upon finding her main partner Wolfie after she discovered a tablet about him and studied it. She's the only of the quartet (later quintet after Leo and Regulus) to have to have a creature partner of the opposite gender.

Silver Wolf of the Wind / Wolfie

"I warn you, Regulus: lift so much as one finger to harm Kiyo and you are finished." 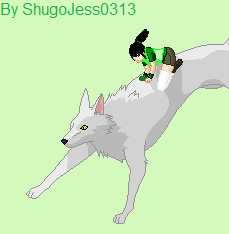 A Nature Civilization creature. Kiyo took a tablet about a Beast Kin sometime between "Om Nom Nom" and "The Hunted". When she was attacked by Leo's light creature Regulus, Blade Wielding Warrior, Kiyo summons the Silver Wolf of Wind for the first time. After which, they became pretty close. He hates Regulus, because the latter almost killed Kiyo. He's the only one of the quartet(later quintet's after Leo and Regulus)'s creature partners that is the opposite gender of his duelist.

Allie gave the nickname 'Wolfie' because he looks like a normal wolf but bigger.

Leo before he cut his hair.

A white-haired emo boy who works as a minion of The Choten. At age eleven, The Choten saw his potential and offered to join him to teach him his way of Kaijudo, Leo was reluctant at first, but when his parents were taken hostage, he joined him. Ever since, he spent a few years working for The Choten and training Kaijudo by him. When he met Ray and co., they became enemies and used his main partner, Regulus, Blade Wielding Warrior to attack them, especially Kiyo. However, when he realizes that his her true loyalties lie with Ray, not The Choten, he defects from the latter and joins the former and his friends.

"I am Regulus, Blade Wielding Warrior! I am one of the most powerful Skyforce Champions in the Light Civilization!" 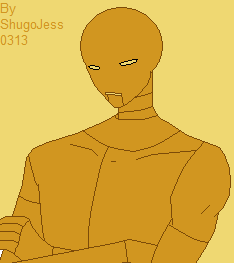 A creature from the Light Civilization and Leo's main creature. He first appeared when he was summoned by Leo in the school library to attack Kiyo, but he was stopped by Wolfie, who was summoned by the former. No matter how he fails, he still fights alongside Leo. After his partner's Heel–Face Turn, he's still his partner.

"The endless laugh, Cure Joker!"
A classmate of Mana, Rikka and later Makoto. She was your average middle school student, but that changes when she meets, a mysterious male third-year student with green messy hair, who goes to the same school as her, named Jaku Midoriyama, who somehow has connections with Thrump Kingdom, Jikochu and Pretty Cure. She later became Cure Joker when she swore to protect people's laughs and joined the other Cures as the [[Sixth Ranger sixth member of their group]].

A mysterious male third-year student with green messy hair, who goes to the same school as the Pretty Cures (sans Alice and Aguri), who Ran meets, named Jaku Midoriyama, who somehow has connections with Thrump Kingdom, Jikochu and Pretty Cure. It's later revealed to be Jacques, the fairy who went missing during the Thrump Kingdom attack and became Ran's partner.

This is the character sheet for the Total Drama Fan Fic reboot, Sweetheart Pretty Cure. Please help with the blurbs!