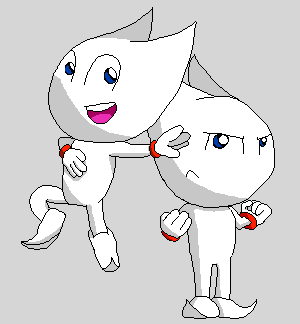 Hello. I'm JankyKong. You know, that one guy who started messing around in the Forum Games not long ago and now refuses to leave? Well, I'm here now, so get used to it.

(JankyKong was eventually added to The Scrappy. Bear in mind, that trope usually falls under No Real Life Examples, Please!!)

Anyway, what is there to say about me? I'm just your average troper. Trying to break in to the position after lurking for the better part of a decade. I like video games, mostly those on Nintendo systems, I've more recently taken a liking to anime, and I follow certain Web Original creators. I like to think that I know what I'm talking about most of the time, when I realize that's not really true. I also like to imagine that I like a wide range of media, when, again, I know that's not really true. But hey, I'm willing to branch out.

I'll work more on this page as time goes on. Hopefully I don't come off as too annoying during my stay.

(The Scrappy was later renamed to The Janky. Guess that didn't pan out too well. Oops.)

Some tropes that describe me:

Tropes I like
Pet Peeve Tropes
Tropes that apply to my avatar gallery (Look, all the cool kids were doing it.)
VG Music Game rounds I've hosted

After being unsure what the game was all about for months, trying to ignore it as much as possible, before finally learning what it was all about, I became a player of the Hunger Games Simulator thread starting with Reboot Season 209. 'Tis fun. You should try it sometime.

The flag team of Ōarai Girls Academy’s Sensha-do program. Led by commander Miho Nishizumi, the girls use teamwork and their Panzer IV tank to push their way to victory.

The Palace Ruler of the Pyramid of Wrath. She seemingly represents Futaba Sakura's self-loathing and self-blame regarding the death of her mother, but there's more to it than that.

A student at Yamaku Academy, a school for students with disabilities. She bears scars from a childhood tragedy all over the right side of her body.

A cat-like creature who is one of the founding members of the Phantom Thieves of Hearts. He teaches his fellow thieves about the workings of the Metaverse.

A Robot Master from Greece who was to be entered in the first Annual Robot Master Tournament. His signature attack is the Centaur Flash.

A Witch born from the soul of an unfortunate hero who lost her shot at love. She views the world as her stage and the other tributes as her audience.

"What if I can't become friends with them? What if they ignore me? Or think I'm weird?"
Appearances: Season 211, Season 218 (6th OG Anniversary/All-Stars Season) note As a member of the Janklerfish Team
Source: Komi Can't Communicate

A young woman who struggles to communicate with her peers. She wishes to overcome her anxieties and make 100 friends.

"I wish I may, I wish I must, find a princess before I bust!"
Appearances: Season 212, Season 218 (6th OG Anniversary/All-Stars Season) note As a member of the Janklerfish Team, Season 226 note As one of the Reboot First Deaths
Source: Frogger series

The star of a popular arcade game from the 80s. He’s been searching for a princess to kiss ever since the passing of his prime.

A laid-back fisherman who lives in the jungle. Often loses track of his best friend Froggy, and gets sent on adventures to find him.

"This world is full of so many colors. I wonder what color I am?"
Appearances: Season 214
Source: Iroduku The World In Colors

A 17-year-old mage from the year 2078 who views the world in monochrome. She was sent 60 years into the past in hopes of restoring the color to her world.

"Please don't make me go with a creep like him! Pleaaase!"
Appearances: Season 214
Source: KonoSuba series

The Goddess of water, worshipped by the Axis faith. This comes with nowhere near as much prestige as the title would imply.

"I could get to like it here!"
Appearances: Season 215
Source: Cells at Work!

A form of bacteria commonly found in the skin and nostrils. Tends to appear in grape-like clusters, hence the name.

A funny-looking man in a yellow and blue costume. He has misled himself into believing he is the legendary super fighting robot, Mega Man.

"Huh... feels nice to have Midna off my back for once..."
Appearances: Season 216
Source: Animal Crossing: New Leaf

A smug villager believed to be a reincarnation of the Hero of Twilight. Is easily attracted using figurines with his face on them.

The Light Music Club of Sakuragaoka High School. When they're not goofing around and eating cake, sometimes they play music.

"The higher you climb, the harder you fall. Better watch out."
Appearances: Season 217
Source: Deemo

A girl living in the castle of the mysterious piano-playing shadow man, Deemo. She wants nothing more than to stay with Deemo forever.

"If you are what you eat, then I only want to eat the good stuff."
Appearances: Season 219
Source: Ratatouille

An unsuspecting culinary genius. Unbeknownst to anyone, the rat under his hat is the real mastermind.

An aspiring young musician. His dream puts him at odds with his longtime music-hating family.

"Everyone has a secret self they don't show to people."
Appearances: Season 223
Source: Spy X Family

A master spy and his adopted daughter. Unbeknownst to him, he adopted a telepath.

A sheep-herding robot master who turned violent after being infected with Roboenza. His signature attack is the Thunder Wool.

An alien rabbit merged with a replica of a legendary hero's headgear. He idolizes said legendary hero, and wants to be just like him.

"The DJ stinks, the banners are crooked, and the cake should be chocolate! You're gonna ruin my party!"
Appearances: Season 225
Source: Pac-Man World

A robotic impersonator of the world-famous Pac-Man. He wishes to be just as popular as his inspiration.

A popular voice actress in the anime and video game communities. She has over 400 voice credits to her name.

The charming host of various fun-filled party games. He assists Miis as they take part in his games.

A pair of funky-fresh dudes hailing from the planet Funkotron. Can often be found jamming out in their Righteous Rapmaster Rocketship... when they're not crashing it.

Two of the most cunning and notorious burglars in all of Badville. Either that, or former criminals hired to test out security systems. It's a bit unclear.

"Hitomi, I want you to visit me when I was a sophomore in high school."
Appearances: Season 230 (Time Season)
Source: Iroduku The World In Colors

A loving, elderly mage from the not-too distant future. She was a bit of a troublemaker when she was a teenager.

"Aw, man! I'm a meme! This would be funny if it wasn't so horrible."
Appearances: Season 231
Source: Pac-Man and the Ghostly Adventures

A student at Maze High School. When he's not in class, he's protecting the city of Pacopolis from the threat of the ghostly Lord Betrayus.

A four-inch personal robotic helper. Whatever it takes to make people happy, he'll do it with determination.

A cleric hailing from the town of Flamesgrace in the Snowlands. An act of kindness on her part led to her being unexpectedly tasked with a religious pilgrimage that wasn't supposed to be hers.

"You'd better get all the 1-UPs you can, you're gonna need 'em!"
Appearances: Season 235
Source: Bootlegs

A minifigure modeled after a citizen of the Mushroom Kingdom. He is infamous for his possession of a buzzsaw.

"It's time for us to go now!"
Advertisement: