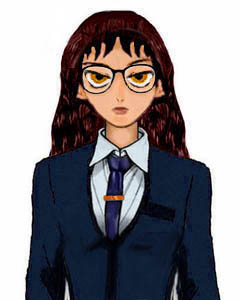 It's fasinating how much better one looks when one is drawn in a way which makes one look downright sinister.

Inkki Bookman was born while Inkki's parents were holidaying in La Reunion in the town with the unfortunate name of Le Tampon. Inkki nowadays lives in South Australia where Inkki works as a night patrol guard. When Inkki isn't at work, Inkki ends up spending way too much of Inkki's free time posting in internet forums and watching fansub animes.

When it is bedtime, Inkki likes to read one of a growing collection of manga that Inkki has brought with the meagre funds that Inkki earns from Inkki's job.

Inkki's pet peeve is that a lot of letters/bills sent to her are mislabeled as Nikki, this is even more grating when Google

also does the same thing when I type in my name... GRRRRR!

Inkki Bookman's real life last name is not Bookman, Inkki chose it as because it sounded cool.

Inkki also tends to speak in the third person.

♥♥♥♥ = Originated the trope/series.(Not including extra edits other people add later on.)

My main contribution to the TV Tropes Wiki so far is:

Inkki also has this compulsion to add pictures to as many of the pictureless tropes that Inkki looks up as she can & sometimes these pictures end up as fan favorites.