Just an American-Italian guy from the East Coast. Not actually a Cyborg Space Chicken.

I’m mostly working on the Trope Pantheons project, though I occasionally dabble in other forum games.

An original (unpublished) Urban Fantasy series of mine, it follows the tale of the first Demon to arrive on Earth in centuries, living among humanity in secret while combating the drama she faces back home.
Titular Character
Name: Bohemianote ”Mia” for short, her mom calls her “Bo”

Backstory: Bohemia is the daughter Asmodeus and Lilith, a Royal Succubus and inheritor to the throne of the Lust ring of Hell. Having Parental Neglect the majority of her life thanks to the reckless indulgence of her mother and especially her father, she longed to go to the human world and find the companionship that her parents refused to provide her, and, after over 300 years of waiting, she finally escaped. She now walks among us, trying to uphold the Masquerade while also dealing with family drama and her demonic nature.

Personality: A confused and insecure girl, she doesn’t want to become a queen and has no interest in the family tradition. Despite her upbringing, she treats social interactions with a surprising amount of levity, although she’s not exactly good at conversation.

Abilities: As a Royal Succubus, Bohemia has access to Demonic Magic, most notably Hellfire, levitating and teleporting objectsnote She mostly uses this one to clean up and get dressed quickly, and the gale storms of the Lust Ring, among others. She can also fly with her Succubus wings.

Weaknesses: In spite of her power, she isn’t adjusted to actual combat and would rather avoid fighting as much as possible, her strategy is, at its core, “throw big magic at enemy, then fly away”.

Goals: At her core, Bohemia just wants a life. She wants to go out and experience the world that her mom and dad refused to show her, and she wants to befriend someone, though she fears that You Can't Fight Fate and that she may one day become the queen of lust 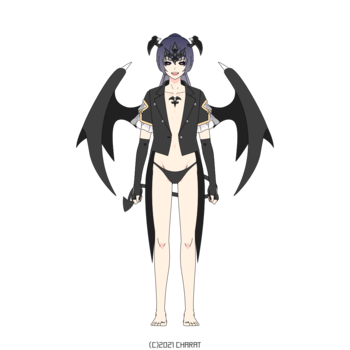 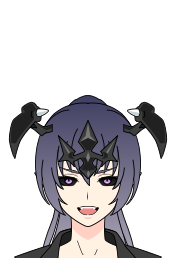 The King of Lust, Asmodeus is a Royal Incubus and the father of Bohemia. He’s staunchly in support of keeping Hell in “eternal torment” modenote Mostly because it would give him some sort of responsibility. and finds the plan to reinvent it repulsive.