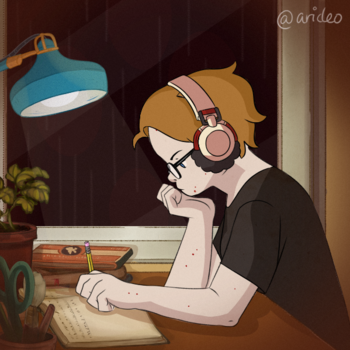 Couldn't bother to make a new self portrait so have this Picrew
"I am gone quite mad with the knowledge of accepting the overwhelming number of things I can never know, places I can never go, and people I can never meet."
Sylvia Plath

Oh hello, you made it to my page.

I'm an enby (she/they) psychology student from the US of A just trying to make it by. I've been lurking TV Tropes since 2011, but I didn't join until April 2018. On the forums you can catch me in Forum Games and sometimes Yack Fest, but I also pop up a lot in Projects: LT/P and Projects: Short Term.

Oh yeah, and I made a craptastic webcore-themed website

note If you click around on all of the pages you may find some surprises!. Check it out if you're into that stuff.

open/close all folders
Basic shit about me

Tropes that describe me
Stuff I like
Note: This folder is currently under construction.

Don't watch much anime these days, so don't expect a big list.

(Good lord, this one is tough)

My player character from We Are All Pirates' Revenge. She's a petite witch with amnesia because magic is cool.

You can read her character page here

My player character from Tropers: The Series. She's a sentient computer from the 80's who was introduced by getting stuck in some sand. Cue "I don't like sand" memes.

You can read her character page here