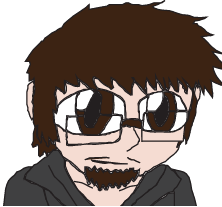 The man himself, in all his adorkableness.
Um, HEY! My name, (as far as you know) is CJ Croen 1393. I’m here to make a name for myself!
Advertisement:

About me? Well, I have Asperger’s Syndrome. My hobbies include drawing, being on the computer, reading, brainstorming and talking to myself.

I have many Fanfics that are stuck in a continuous Development Hell loop: