I also hurl rainbows. Yes, it's a metaphor.
You, [subject name here], must be the pride of [subject hometown here].
— G La DOS, from Portal, a game I haven't played and often pretend I have.
Advertisement:

, usually in the R

areas (sometimes even in the Yack Fest

area, when there's no-one around to play with), but is also a person who essentially has a busy, busy life that is unfortunately not as entertaining as the Internet and its never-ending content, and of which is, unfortunately, more important, for it pays the taxes. I've been lurking around here for some years but didn't see the need to create a user account until there was this edit I sincerely wanted to make a few months ago. Aralyn has nothing to do with my real name- I just grabbed a random name from a website that, come to think of it, doesn't have any conventional nick-name possibilities. NO UNACCPETABLEnote I totally meant "unaccpetable". It's like unacceptable only it's an obscure form that was derived from Assyrian. You've probably never heard of it before.

Aralyn is also that person who gives people bugs, that person with that lingering obsession with hats, and that girl from Land Down Under. As well as that person whose troper page is pretentiously long for no apparent reason.

I am currently in possesion of

Will update as I steal from more people. God, I have no life.

Aralyn is a on-off persona in this very wiki's forums, seeking respite from her weary dreary life by delving into the bosom of roleplay games and lurking people's profiles and past conversations. Aralyn lives in the desert in a flat, regularly meeting talking turtles and other nuisances in her travels along the street where she resides. She has zero children and has inadvertently killed probably every single one of her pets. Including the potplant which is faking life signs at the moment.

I also seem to love talking about myself. Is there a trope for that?

Note: I'm not a gamer. It's because I don't have the time, nor the money, nor the skill, nor the dedication to ever properly get into an elite video game community. But I follow the trends, I read about upcoming games, I watch Let's Plays, I read reviews, I critique and compliment games, I get excited with my gamer friends. So yeah. I'm a mainstream, vanilla non-gamer who pretends to know what they're talking about anyway, and I'm cool with that. These are mostly games my friends have recommended to me, as well as games I've seen on Let's Plays and a few I've played.

Role-plays That I Am Noticeably And Currently Contributing To (In Ratio To Other People's Contributions), In Order Of Sign-Up, Which May Or May Not Have Died

I generally join fantasy roleplays, or otherwise really Bad Ass ones, and as a rule I generally steer away from crossovers or canon roleplays (bad experiences, don't ask) unless they are really good. What else, what else...oh, I also will generally use one of the few characters I have invented, due to my laziness in creating new characters. They are listed below this archive of my past roleplays.

This is more for my benefit than yours, so I can put my links somewhere apart from Favourites and Watchlist. Also for advertising purposes. Role-plays never grow sick of more lives to eat out of.

Hercine - City of Wonders and Magic

The Fallen Angels or The Second Chance

In The Throes Of A Mad King- A Superpower Lottery RP

Roleplay Expies, in Order of Conception:

Again, this is more for my benefit than yours. See, when I role-play, the character I use is usually an expy of a character I used in a previous role-play. Sometimes I make up new ones but generally they're based off/exactly the same as previous RP characters. I have several, none of which are really expies of popular media (well, except one, but not realy intentional. Just a well-known trope. Probably.) 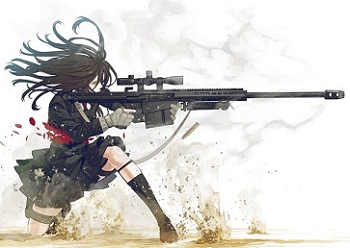 I found a thing.

A cold, ruthless, Green-Eyed Monster of a ex-Triad sniper. My first ever RP character in TV Tropes and probably retired. Unless I find another one of those Black Lagoon-esque role-plays again... 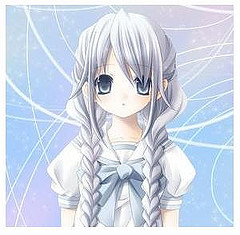 A fallen angel version of Elanor/Lorna, but different enough to warrent her own entry. 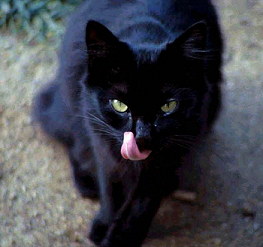 This is my absolute favourite character so far, for the pure fact that he is such a simple character and yet I can be a Large Ham in this role (not that I don't in others but it's part of his personality here :D). A mysterious Magnificent Bastard black cat that is actually a demon tied down to the human plane, who definitely does not resemble Mogget from the Old Kingdom. 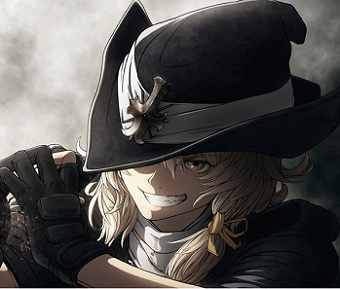 Ax-Crazy Daddy's Girl with a fetish for Nice Hats.

Recent character of mine, she's my other expy for military-esque roleplays.

Excuses for being absent from TV Tropes:

I Archive My Excuses, Apparently

See Announcements. I had issues that I don't want to talk about.

I was just trying to break from my addiction! Why must you tempt me with your shiny buttons and intellectual analysi? CURSE YOOOOUU!!

In all honesty now, in a tragic event involving playing soccer for the first time in a long while, I believe near the end of September, I broke my leg, and it was the most pain I have ever felt in my entire life.

I was kept in hospital, undergoing surgery somewhere down the track, and stayed in hospital as long as I could because the beds were very comfortable, and I didn't need to make the food, nor clean the dishes. After a lengthy 3 week stay I was finally kicked out with crutches and a hospital fee, after which I went into a 2 week frenzy of study, because I was behind in my study schedule in preparation for my tests.

I then put off telling you guys for another week, mostly because I felt scared about the R Ps I was playing. So, yes ^u^ That is my lengthy excuse, and I sincerely apologise for lagging the R Ps I've been in. I believe I broke my leg some time after I died on this site, and I have no excuse for that, which I also apologise for.

I will now proceed to profusely beg the G Ms of those respective R Ps for forgiveness.

Vandalism here. I mean, it's sort of obligatory in this site:

Wait, who keeps vandalism in a folder?

Me apparently. Not that that's a bad thing. You know.

Vandalism
You are a really cool person,
I'd like to know you better,
You're a funny kinda dude,
And I guess you're not too rude,
Dude you're awesome, and that's true. - The Songseamster Also, you can't just leave a story like that on my page and not expect something of equal or lesser value on thy own page! *ahem*
An Aralyn fanfic by Karl Kadaver
Once upon a time, Aralyn was walking down the street. She was looking for a pastry shop that sells pastries, but every one that she went to only sold moldy cheese and stale potato crisps. So she went up to the manager of one of the stores and asked, "Hey. What gives?" and the manager told her, "We sold all of our pastries to that rat bastard Karl Kadaver." And she said, "Where can I find that rat bastard?" and the manager said, "He's at the warehouse district, in warehouse 37." So she went there and found Karl. Karl, being the rat bastard he is, was sitting on top a pile of pastries and wiping his fingers off on a napkin since he had just eaten a pastry. He might be a rat bastard, but he's not a slob. Sheesh. So Aralyn drew her mighty pickaxe and said, "We must Kung-Fu fight now" and her lips kept moving after she finished speaking like in those old kung-fu movies. Then Karl said, "I will defeat you because my kung-fu is stronger than yours" and Aralyn said, "We will see about that" and she charged at him. He leapt into the air because he knew Wire Fu, but she managed to cut his strings and he fell to the floor and she killed him with her pickaxe. As she picked up a pastry and started to eat it, she said, "Nothing tastes better than kicking ass."
The End. (OR IS IT?!)
Vandalism the Second
I bought a new folder :)
I am currently obsessing over

Cinematography and its processes, though more the story-telling aspects than anything. It's really random, but I'm just lurking on blogs and stalking world-building behind the scenes art and so on. Also, A Song Of Ice And Fire; I've read up till Dance With Dragons and am currently waiting for the reservations list to clear off because I am too cheap to reserve a spot for myself. I am placating myself by watching Game Of Thrones Youtube clips. And watching Game Of Thrones. Illegally. Because I'm in Australia, and our networks apparently have better things to do.

The Chaos Walking series. I thought the ending could've been a bit less...I don't know, a bit less cleanly I suppose. I enjoyed the blurring between good and evil but my issues with the series was mainly how the series was wrapped up. Ben was too righteous, too much of an embodiment of peace and happiness. While it was alright while he was 'dead' and considered a symbol of Todd's childhood (and how it's been 'killed' or 'ripped' away from him, if you will), when he 'came back' he seemed just a voice of good, no flaws or misgivings unlike any of the other flawed and therefore fascinating characters in the whole series. The more I think about, the more I feel just disatisfied with the overall ends of many of the characters. Even the Mayor whose death seemed the like the climax of the whole series seemed a little anticlimatic, by how he...ugh. Words cannot be found. Ignore my nit-picking. It's an amazing series and you should by all means read it. It will not disappoint. I actually cried at one of the deaths in the first book.

Pronouncing the word hilarious "hi-laaar-ri-us". It will pass soon. Hopefully.

"don't hug me, i'm scared"- short film by This Is It. Green is not a creative colour...

My bookshelf/folder for random things

Click for some bad Statler and Waldorf.  Waldorf: Well, thank God that's the end of her self-deprecating jokes!
Statler: You'd think there would be no end!
Waldorf: Well, let's end this thing on a high note, since she can't do it herself.
Statler: ...you realise she's still doing it?
Waldorf: What, really?
Statler: Yeah, she can't think of a joke so she's just drawing it out with more self-deprecation and self-referential exposition. It's horsedung, really.
Waldorf: Look, she's still doing it!
Statler: She knows it's getting awkward, right?
Waldorf: I guess she's going to keep typing until a joke hits her.
Statler: Who could ask for anything more?
Waldorf: We could!
Statler: Yeah! Earplugs!
Both: ...do-ho-ho-ho-hoh.