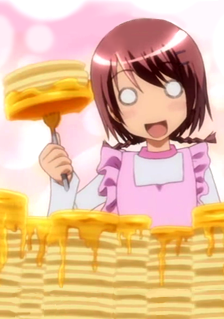 Mugi Asai and her imaginary pancakes - long-time universal avatar, for no actual reason.

Greetings. My name is Ajoura, I'm an inactive reader from until 2012 and a contibutor from 2016 onwards.

I live in Russia, in Moscow, so what are you going to do about it. I have a university degree in Biotechnology, and I am also a certified Russian-English technical translator. Currently, I work as a medical translator. My hobbies are various sports (cycling, skiing, swimming, powerlifting), anime and video games, especially obscure ones. Someday I will write articles about all visual works I like.

My main hobby, though, is music. I am a trained pianist, self-taught multi-instrumentalist and a homebrew music producer. I started making music in 2008, released several Genre Roulette albums, then started establishing my Signature Style in the end of 2015 after two years of genre-researching, and is now working in one direction. My utmost favourite music styles are South-Eastern Asian music, European Renaissance music, as well as instrumental Easy Listening music (classical-styled); I also like catchy melodies, unusual instruments and genre experiments.

You can listen to my music on my YouTube channel

I was the active contributor of Russian Lurkmore

wiki and wrote 33 articles mostly about music and memes. Then I lost all interest in it because of its Russophobic and overall bitter cynical tendencies. Now I am here, with positive views and burning eyes.

), am not good with Reddit and avoid Tumblr, so the only ways to find me are these.

Thanks for reading all this. I wish you have a good day today.

Most favourite works of this troper, present on TV Tropes: