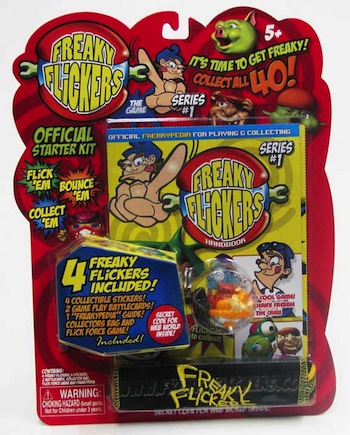 There are plenty of popular toylines; Transformers, My Little Pony, and LEGO, to name a few. But then you get one of those toylines - the ones that seemingly appear out of nowhere, exist for about a few months or so, and then disappear as mysteriously as they came. Freaky Flickers was one of those toylines.
Advertisement:

However, what set it apart from the rest of those toylines was how it made the assumption that it was more popular than it actually was, a conclusion reached based entirely on test markets. The creators of the toyline thought it was so well-regarded that they even attempted to create a feature-length animated film

(whist bragging that it was animated entirely by one person), only for said film to get stolen

before it could be released. A scene from the film still appeared on the line's Flickr page, and can be seen here

, as well as a short environmental PSA

The line was very similar to GoGo's Crazy Bones in both gimmick and inspiration, the sole difference being the inclusion of rubber parts to increase play value. It also encouraged children to invent creative ways of playing with the toys, although that didn't stop a few official ones from popping up. Ultimately, despite all attempts, it did not survive, disappearing just like the rest of those toylines.

Compare to Foodfight!, another animated film that was also intended to spawn a franchise before the hard drives containing its assets were stolen (although unlike this film, was eventually actually released).