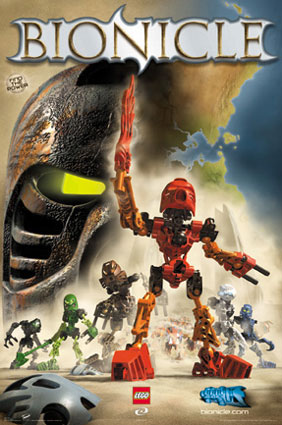 LEGO's (surprisingly in-depth) Merchandise-Driven construction action figure storyline, originally released as a sub-theme for its pre-existing LEGO Technic line before spinning off into its own theme. Featuring (Bio-) Mechanical Lifeforms in a Schizo Tech universe, the story mainly concerns the conflict between the followers of Mata Nui and the forces of Makuta. Hence the title, Bio-Chronicle.

The story is told through comics (Published by DC Comics for LEGO Club members and later widely distributed by Papercutz; these hit the high points of the story), a book series (that went in-depth), Web Serials (side stories), and the occasional Direct to Video films (by Creative Capers Entertainment for the original trilogy, Threshold Animation for The Legend Reborn, and Wang Film Productions/CGCG. With both Miramax Films and Universal as distributors). There are also a few beginning reader books, unimportant side stories designed to deliver An Aesop.

The series has numerous characters; check the Character Sheet for more info on them.

The toyline ended in mid-2010. The storyline was continued on LEGO's website with Bara Magna restored as Spherus Magna and its people forming a unified society with the Matoran, but it eventually petered out. It was replaced with the more sci-fi Hero Factory, which boasted "From the makers of BIONICLE!" on the first wave's packaging.

However, the line restarted with a Continuity Reboot in 2015. Sadly it was a Short-Runner compared to the original, with LEGO announcing its cancellation

One very notable aspect of the storyline was that all of the comics and nearly all of the books and web material were written by one man: Greg Farshtey. Throughout BIONICLE's entire run, he kept in close contact with the fans, particularly the surprisingly large fan site BZPower (check it out here

). He answered questions, dropped hints about upcoming storylines, and stayed commendably dedicated to his work for all ten years it ran.