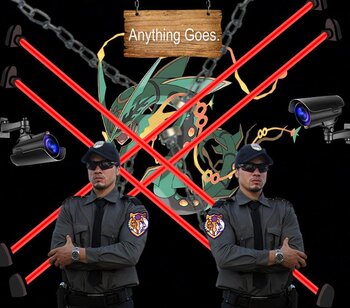 Mega Rayquaza, the Pokémon so overpowered it got banned from a ban list.note This wouldn't even be the last and only time this happened, Zacian's formes would follow several generations later.
"Generation 5 began with several former Ubers dropping into OU, [Shaymin-Sky] among them and history was made. It wasn't that Skymin was immediately banned for being too fast, too strong, and too good an abuser of Serene Grace. It was that it was so despised that not a single person voted for it to stay in the tier. Absolutely everyone wanted it gone. And usually, even cases that seem incredibly obvious have a few dissenters, so it speaks to just how universally infuriating Skymin's Air Slash antics were."
— False Swipe Gaming, "How GOOD was Shaymin ACTUALLY?

With over 800 Pokémon and counting in existence, it's impossible for Pokémon to keep an ideal balance as what would be possible in other role-playing games. It's also worth noting that what works in the single player campaign may not work when playing competitively with other people or the post-game battle facilities, and vice-versa. Below are the many species that got the shaft, and the many that frequently give players the shaft.

open/close all folders
Both
Over the years, several Pokémon, types, and moves have gone both ways as tier-induced scrappies, especially in competitive play. Some cases were high tier scrappies that fell to the opposite end due to Power Creep, nerfs, and/or changes in mechanics. Several cases are in the BL (Borderline) tier, meaning that they are outclassed or outperformed in OU, but too strong for UU. Some have a base form that's not strong enough for OU, but a ridiculously overpowered Mega form to the point that it's Uber. And some are even high-level Olympus Mons that are outclassed by a newer Legendary — sometimes by a different form of themselves — yet remain too powerful to leave Ubers.

Advertisement:
Doubles
The Doubles metagame may render certain above-listed Pokémon and moves (notably entry hazards) unviable thanks to the addition of another opponent on the field, but it has its own set of high-ranking Scrappies; usually ones that are otherwise unremarkable in Singles matches.

Official Ranked/VGCs
This also comes up every now and then in the official tournament scene—which differs from the above-mentioned Smogon reactions due to having different rules—as well as Ranked Battles in the official games, which were first introduced in Pokémon Sword and Shield. As a result, complaints about overpowered Pokémon and moves tend to be somewhat different:
In-game
All of the above was mostly focused on the metagame — but don't go thinking the single-player campaign where nearly any 'mon can shine is free from some true stinkers.