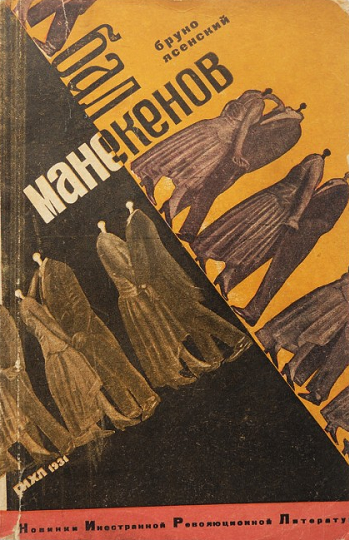 Don't be stumped and head on over!
Advertisement:

The Mannequins' Ball, original title Бал манекенов, is a satirical play in three acts written by Bruno Jasieński for publication in 1931. The play was one of Jasieński's first works after obtaining Soviet citizenship in 1929. Less than a decade later in 1938, Jasieński was one of the many people targeted and murdered during the Great Purge and his oeuvre became forbidden until Jasieński's rehabilitation in 1955. The Mannequins' Ball therefore only had a few immediate years to be put to stage, a notable one occurring in Prague in 1933, and then had to be rediscovered decades later. For perspective, it took until 2000 for the script to be made available in English.

The play opens at the eponymous annual ball held by the headless mannequins in France, or at least Paris. The leader of the French Socialist Party, Paul Ribandel, accidentally discovers the ball. The mannequins can't afford a credible witness and therefore non-lethally behead him. One mannequin takes the head for himself, donning it so that he can attend a human party a few blocks over. This party, the setting of the second act, is hosted by Mr. Arnaux, the owner of a car factory. Among the guests are his daughter Angelique, his competitor Frederic Levasin, Levasin's wife and Arnaux's mistress Solange Levasin, and a representative of the Bank of France named Devignard. Ribandel is invited to prevent a strike brewing in Arnaux's factories, yet Levasin wants that strike to happen so he can swipe Arnaux's customers. The mannequin posing as Ribandel is bombarded with bribes and flirtations to make the strike go one way or the other, but he doesn't understand what's going on and ends up organizing an even bigger strike at both factories with the bribes he's received. The second act ends with the mannequin being accused of improper conduct with Solange and the police urging the party-goers to stay inside because the strikers have taken to the streets. During the third act, the mannequin is cajoled into a friendly duel for show so that Levasin can defend his honor. The friendliness drops when Levasin and Arnaux learn that the mannequin posing as Ribandel instigated the strikes at both their factories. Just as Levasin is about to shoot the mannequin, the real Ribandel breaks past the guards and demands his head back. The mannequin happily hands it to him and gets out of the humans' mess.

Discussion of The Mannequins' Ball inevitably compares it to R.U.R., a play that is only a decade older, from a comparable cultural background, and also about constructs as a secondary working class. The constructs of The Mannequins' Ball, however, aren't a technological advancement that end up rebelling and replacing humans. Rather, they form a hidden society that don't like or understand humans. The mannequins' puzzlement at human behavior and the miscommunication that results from it provide most of the humor of the play.

Tropes used in The Mannequins' Ball: