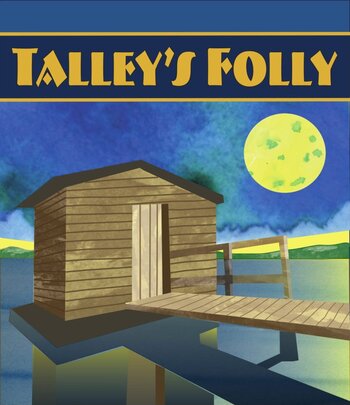 Talley's Folly is a 1980 play by Lanford Wilson.

The setting is a boat house in Lebanon, Missouri, July 1944. The play, which runs 97 real-time minutes without a break, starts with a Jewish man, Matt Friedman, waiting in the boat house. Matt has come to the home of the wealthy Talley family because he wants to marry Sally, the daughter. It seems that Matt, an accountant, spent a week in Lebanon on vacation the previous summer, and fell in love with pretty Sally. They spent a romantic week together, but afterwards, Sally rejected Matt, not answering the letters he sends her and not coming out when he came to the hospital where she works as a nurse. Matt presses Sally to admit her feelings, and over the course of the play, the two of them admit secrets that have made each of them hesitant to accept love.

Judd Hirsch appeared in the original production as Matt. This play is the second in a trilogy of Wilson plays centering on the Talley family, being a prequel to his 1977 play Fifth of July and followed by 1981 play Talley & Son.note Talley & Son was an Immediate Sequel to this play, being set in the Talley house up on the hill, after Sally leaves the boathouse, and featuring her packing to leave on her elopement with Matt.