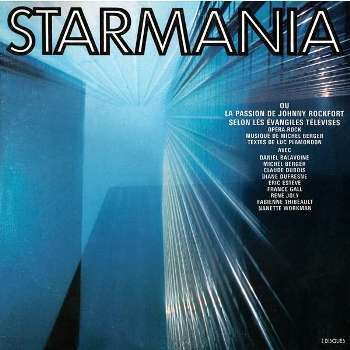 Starmania: ou la passion de Johnny Rockfort selon les évangiles télévisés is a 1978 Franco-Quebecois Rock Opera with music by Michel Berger and lyrics by Luc Plamondon. It's usually shortened to Starmania. While various versions have been produced through the years, the basic plot runs as follows:

20 Minutes into the Future, the West (comprising the Americas, Europe, North Africa, Russia and Japan) has united as the new country, and Zero Janvier, president of the biggest Mega-Corp in "The Occident" (as the new country is known) is now campaigning to become President. The chief plank in his platform is a promise to eliminate the terrorist group Les Etoiles Noires (the Black Stars) and their leader Johnny Rockfort, and to this end he has convinced the Etoiles' information broker Sadia to secretly work for him instead while he also courts the retiring film star Stella Spotlight. Johnny Rockfort's own plans involve the kidnapping of television sweetheart Cristal, but his heart starts beating to a new rhythm when he falls in love with her instead. Overlooking all of this is Marie-Jeanne, who's a waitress in the Underground Cafe where the Etoiles Noires meet, and her friend Ziggy, an obsessive David Bowie fan whose dearest wish is to get to be a disc jockey on Cristal's music program Starmania.

Tracklist (of the 1978 album recording)

Personnel (on the original 1978 recording)