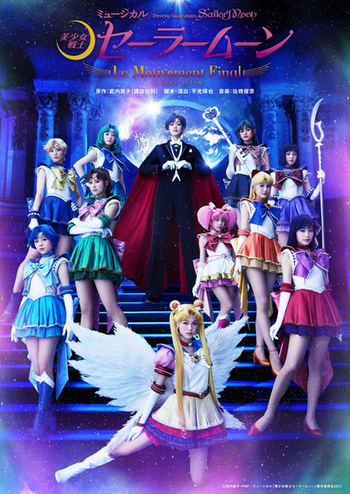 Shortly after the grand and successful debut of the Pretty Sailor Soldier of Justice in 1992, the decision was made to adapt the work into a musical.

And thus, on August 11, 1993, right between the first two seasons of the popular anime, the very first musical hit the scene. And like anything with "Sailor Moon" in its name, it proved to be a massive success. How big? The original set of musicals ("Musical Specials") produced by Toei Animation lasted until 2005 before hitting a "short hiatus". And this isn't counting whatever related content, such as behind-the-scenes fare, that also got released.

The first set of musicals, a collection of 29 seasonal Musical Specials that ran for over 800 performances, started as loose adaptations of storylines from the anime and manga. The Sailor Soldiers' struggles against the Dark Kingdom, the Black Moon Clan, the Death Busters, the Dead Moon Circus and the Shadow Galactica were all adapted - multiple times, in fact (more about that later). This, however, led to one unfortunate thing: after the manga and anime ended and the musicals began their version of Sailor Stars, rumors were circulating about the inevitable demise of the musicals. Did we mention this was around the eleventh musical in 1997? The massive fan support at the time basically saved the musicals from an early grave, but since there was no more source material to adapt, the musicals began introducing their own storylines and revisiting previous content with new twists. Thus, the world was blessed with (in no particular order) robot pirates from thousands of years ago, vampires, werewolves, Artificial Humans, talking cats represented by people in cat suits (besides Artemis and Luna), Sailor Galaxia and Queen Beryl teaming up, and various other things.

Pretty Soldier Sailor Moon Musical Specials
Sera Myu, as the musicals are colloquially known, are officially divided in Three Stages (while western fans divide it by who is playing Sailor Moon, the proper term for the division by actress is "Generation") The bold italics marks musicals that were never recorded, thus not released on home video. Note: The kaiteiban is the "revised edition" of a musical.

In order, Fumina Hara, Miyuki Kanbe and Marina Kuroki get their turn as Sailor Moon. Ends with various events: the retirement of Akiko Yanagi (choreographer, who worked on Sera Myu since the start), the death of Kayoko Fuyumori (lyricist for most songs since the start) and their own version of the Sailor Stars arc (thus, the end).

Only features two musicals before going on hiatus (it technically never ended, which is why the last musical is called the "Marinamoon Final" and not "The Third Stage Final").

New Myu
Following the rather sudden end of the original Sailor Moon musicals, there was not a single word about their future until the 20th anniversary of Sailor Moon came about. With the announcement of a new anime series and new and plentiful merch came a revival of the musicals. While technically not a follow-up to the previous ones (they aren't called Musical Specials, they're produced by a different company, aren't tied to the original anime by using its logos and imagery, there was no "Passing of the Tiara" ceremony, etc.), they're still official Sailor Moon musicals. The musicals are performed by all-female casts.

In 2018, another musical run began coinciding with the franchise's 25th anniversary, this time with the idols of Nogizaka 46 as the leads covering the Dark Kingdom arc. This run is split into two main casts: Team Moon (with Mizuki Yamashita as Sailor Moon) and Team Star (with Sayuri Inoue as Sailor Moon).

Another new musical, dubbed Kaguya-hime no Koibito, was announced for Summer 2019, but was delayed to September 2021 due to the COVID-19 Pandemic.

Only tropes unique (or overly relevant) to this adaptation are listed here. All others are at Sailor Moon and related pages. We now have a character sheet

for tropes specific to Myu-only characters!

The Sailor Moon musicals provide examples of the following: