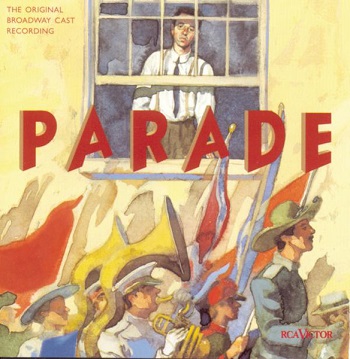 It's like a foreign land
I didn't understand
Being Southern's not just being in the South
— Leo Frank, "How Can I Call This Home?"
Advertisement:

Parade is a musical with music and lyrics by Jason Robert Brown (his Broadway debut). It opened in 1998, and received nine Tony award nominations the following year, including best musical, winning two (Best Book and Best Original Score). Critics gave it mixed reviews.

The show, Based on a True Story and staying mostly true to history, opens on Confederate Memorial Day and proceeds to follow Leo Frank

, a Jewish businessman from Brooklyn, living in Atlanta, Georgia with his wife Lucille in 1913. When a young girl named Mary Phagan is found murdered in the basement of the factory Leo manages, Leo finds himself fighting to prove he is not a murderer, grudgingly accepting his wife's help. Proving Leo innocent is made difficult by the relentless work of prosecutor Hugh Dorsey, determined to convict Leo on flimsy evidence with the testimony of Jim Conley. Furthermore, public opinion against Leo is stirred up by newspapermen Britt Craig and Tom Watson. And meanwhile, Mary's friend Frankie Epps vows revenge on her murderer.

The show examines the relationship between Leo and Lucille as well as racism, anti-semitism, and other issues in the post-Reconstruction American south.