Theatre / On the Town 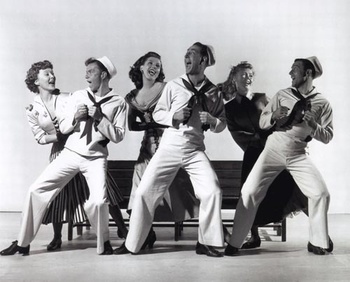 On the Town is a 1944 musical comedy written by Comden and Green, with music by Leonard Bernstein, about the adventures of three sailors on liberty in New York City. Traveling around the city by cab and subway, they variously visit the Museum of Natural History, Carnegie Hall, Coney Island (in both imaginary and real versions), three nightclubs and two girls' apartments before their twenty-four hours are up.

It began life as a ballet called Fancy Free, which choreographer Jerome Robbins worked on using a score by Bernstein; it was about three sailors on leave, but took place entirely around one bar location. Robbins was one of the original creators when it was adapted into a longer musical with scenes and singing, and there are extensive dance sequences, including the Dream Ballet in Act II.

The musical was adapted into a 1949 MGM film directed by Stanley Donen, which featured Gene Kelly, Frank Sinatra, Jules Munshin, Vera-Ellen, Betty Garrett, Ann Miller, and not much of the original score. Comden and Green were around to write the screenplay, so the plot stayed roughly the same. It got a Broadway revival in 2013, just in time for its 70th anniversary the next year, and was rewarded with a Tony Award nomination.

This musical show includes examples of:

Alternative Title(s): On The Town