Theatre / On a Clear Day You Can See Forever 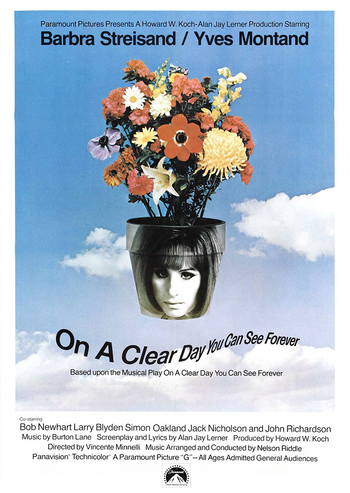 On a Clear Day You Can See Forever is a 1965 musical comedy with book and lyrics by Alan Jay Lerner and music by Burton Lane.

Daisy Gamble is 22 years old and, though seemingly ordinary, expresses some uncanny abilities, particularly over plants. Daisy goes to visit Dr. Mark Bruckner, an experienced hypnotist, to see if he can help cure her of her cigarette addiction. By hypnotizing her, Dr. Bruckner finds out not only about her early life, but about her previous life in the 18th century as a young English lady named Melinda Welles and her four years of marriage to Sir Edward Moncrief, a rakish portrait painter.

Alternative Title(s): On A Clear Day You Can See Forever