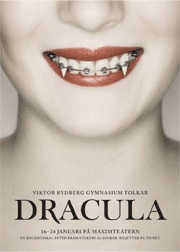 A very cheerful take on the classic
Advertisement:

Dracula: the Musical is a 2010 Swedish adaptation of Bram Stoker's classic gothic horror novel. Althrough it borrows heavily from Coppola's Bram Stoker's Dracula, the writers actually bothered to do their research, filling the film with referances and details that only a person who had read the novel could, and hired an actual vampirologist for advice. The most notable detail is that Lucy's mother is actually in the film for the very first time! A rather unusual step is that the entire musical is narrated by Mina who is having a Interview with the Vampire-esque interview with van Helsing's courious grand nephew.