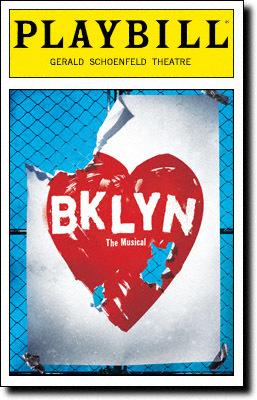 A musical with book, lyrics, and music by Mark Schoenfeld and Barrie McPherson. It premiered on Broadway in 2004 and ran for 284 performances.

The plot focuses on the story of Brooklyn, the daughter of Faith, an aspiring Parisian dancer, and Taylor, an aspiring musician from New York. Taylor is called away from Paris suddenly, leaving behind Faith and (unknown to him) his unborn daughter. Faith raises Brooklyn, so named for her father's hometown, and becomes a famous dancer, but, unable to get over her depression and the loss of Taylor, hangs herself onstage one night.

Brooklyn is sent to a convent to be raised. While there, she discovers that she is a gifted vocalist and becomes a star. Now a famous singer, she travels to New York in search of her father and the meaning of her name. Upon arriving in Brooklyn, she is drawn into a competition with American star Paradice, meets a homeless street musician called the Streetsinger who helps her dreams come true, and is finally reunited with her father, a drug-addicted Vietnam veteran unable to deal with his PTSD.