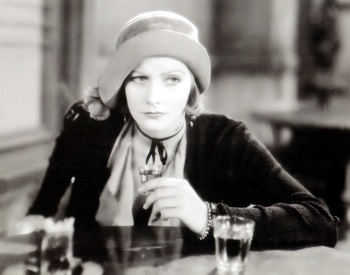 Bottoms up!
"Give me a whisky, ginger ale on the side, and don't be stingy, baby."
Anna's (and Greta Garbo's) first line of dialogue
Advertisement:

Anna Christie is a 1921 play by Eugene O'Neill. Set sometime around 1910, it opens with Chris Christopherson, a hard-drinking, lifelong sailor who now captains a barge, going to drink at his favorite bar. Chris receives a letter from his daughter Anna, who he hasn't seen in fifteen years, since she was five years old. Anna, who was sent to live with maternal relations in Minnesota, has come to New York to look her father up. Chris is under the impression that his daughter has been working as a nurse and governess, but it quickly becomes apparent that Anna is actually a hard-bitten prostitute.

Chris, who regards the sea as a malevolent force, doesn't want to take his daughter aboard his barge, but Anna loves the sea, and tells her father that her time on board has cleansed her. Complications arise when Chris and his barge rescue the survivors of a shipwreck, including Mat Burke, a beefy Irish stoker who takes an immediate fancy to Anna. They fall in love, but Chris, horrified at the prospect that his daughter might marry a sailor, tries to kill the relationship. Anna's anger at the controlling natures of her father and boyfriend leads to a long dramatic setpiece in which she reveals the truth of her past to both of them.

O'Neill's play won the Pulitzer Prize in 1922. It was made into a silent film in 1923, and then in 1930 it was adapted into a major MGM production starring Greta Garbo as Anna. MGM marketed the film, Garbo's first sound picture, with the tagline "GARBO TALKS!" The film was a major success, earning four Academy Award nominations and ensuring that Garbo's career would continue to prosper in sound films. Right after shooting wrapped on the movie, MGM shot a German-language version with Garbo and an otherwise new supporting cast. In an interesting trivia, George Marion played the father in the original stage production, the 1923 silent and the 1930 talkie.