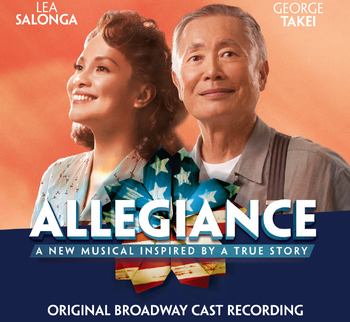 Allegiance is a musical with music and lyrics by Jay Kuo and a book by Marc Acito, Kuo and Lorenzo Thione. It's most famous for involving George Takei, who stars in the original Broadway production, and whose stories of being a child during the WWII Japanese-American interment inspired the play. Its other two leads are Lea Salonga, whose Broadway return broke the Asian-American and Broadway-fan sides of the Internet, and Telly Leung of Glee, Godspell, and RENT.

The plot follows the Kimura family in the weeks and years following the attack on Pearl Harbor, as they are forced to leave their farm in Salinas, California and relocated to the Heart Mountain internment camp in rural Wyoming.

Has no affiliation with the TV show, video game, or Star Wars novel of the same name.