That One Boss / Touhou Project 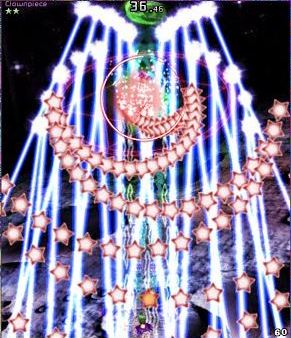 You'll be seeing stars AND stripes...
"Still, is it too easy? Well, I'm about at my limit..."
— ZUN on Perfect Cherry Blossom, the only Touhou game to have a phantasm stage - a level above the usual extra stage.

As anyone who has played Touhou Project will tell you, the boss fights are what these games are all about. There are well over 100 boss characters in the series, and you encounter most of them only once, so it's natural that some make a more lasting impression than others. In fanon, they might be famous for their colorful personalities or ridiculous cuteness levels, but for those who have actually played the games, they will always be fondly remembered for a different reason.

She may not be the hardest boss in her game. She may not test your skills to the same extent as the Final Boss, or your patience and determination like the Extra Boss. Beating her may not even earn you much bragging rights. But she will make your life a living Bullet Hell nonetheless. She is the reason many people have never seen the good endings. She has left countless broken hearts and keyboards in her wake. Even hardened shmup players have been known to reach for the bomb key at first sight of her. She is That One Girl!

Which boss exactly qualifies for the title varies from player to player and depends somewhat on your choice of character and shot type, but generally every game has at least one boss that will make you go pichuun again and again long after you've figured her patterns out. You can always count on them to mess up your until-that-point perfect game. They are mostly found around stage 4 or 5.

NOTE: As always, the Final Boss and Wake-Up Call Boss cannot be That One Boss without being overly hard by their standards. Please do not add them as examples. Also, to avoid cheapening the title, don't list bosses that are only an example on Lunatic difficulty or because of that one spell card you can cancel out with a single bomb. Remember Bonus Boss is completely banned no matter what. This includes Extra stage mid-bosses too.

The Story of Eastern Wonderland