That One Boss / Bomberman 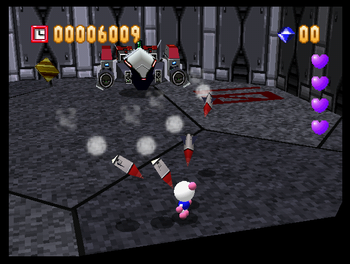 Good luck making it out of this in one piece.
NO!! NOT THE HOMING MISSILES!!!
If there's one thing that people tend to remember about the Bomberman series, more often than not it's the bosses. Bosses in this series tend to be controller-throwingly difficult, often due to a rather unfortunate habit of Fake Difficulty. And if you die and use a continue... As such, the series has officially earned it's own page.
Advertisement:

Note: Unless they are overly difficult for their standards, Wake-Up Call Bosses and Final Bosses aren't allowed.

Examples (sorted by sub-series or console-type):

5 is notable for having some of the cheapest bosses in the series history with bosses so irritating you can't help but wonder what the developers were thinking. For simplicity's sake, only the worst offenders will be listed.

The game that resurrected the series after a long hiatus...and inadvertently brought back frustrating bosses.

Note: The following entries only apply to the Veteran and Expert modes; the Beginner mode intentionally makes the bosses much easier.

The series first 3D game actually manages to avert this as its bosses are much easier than previous games...with two exceptions.

It really says something that two bosses from Online made a reappearance here, though at least they're much easier than before. Additionally, the Lightning Cards from Generation return in this game with one of the boss cards requiring that you beat the boss in under 3 minutes.note Or 2 minutes and 58 seconds in reality due to the timer starting when the stage loads instead of when you actually gain control.
Portable Games (GB Trilogy, Max, etc.)

As to be expected from an Action RPG/Boss Game hybrid that just so happens to be a Bomberman game too.
Advertisement:
Bomberman Online (Dreamcast)
That's right, a Bomberman game with bosses so bad that they actually got their own folder! The bosses in this game take Fake Difficulty to levels the franchise hasn't seen beforenote indeed, they make the bosses in Super Bomberman 5 look as easy as most of the bosses in Kirby's Dream Land! with such blatantly cheap attack patterns that you would be forgiven for thinking that they weren't playtested.
Other Games (Saturn, Neo, World, etc.)