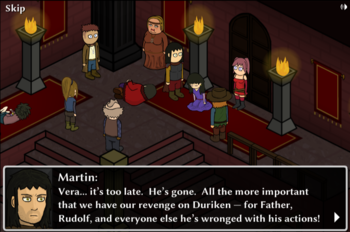 "Father? Why isn't it working?"

A page for the tearjerker moments in the World's End series. Generally, the mood is kept light by humor loaded dialogue and bloody hilarious violence. But there are a few moments where the story can hit close to home.

WARNING! All spoilers will be unmarked! Do not read this page if you have not completed the series.