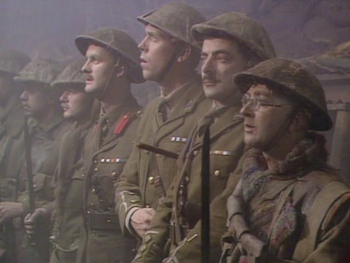 Though Blackadder is still regarded as one of the funniest sitcoms ever to air on British television, the final episode of Blackadder Goes Forth, "Goodbyeee", has one of the most poignant and sad final sequences of any sitcom, ever.

Meanwhile, it's not like the rest of the series had not bouts of glumness at points...