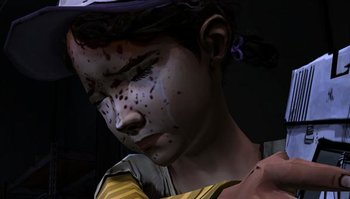 Telltale's The Walking Dead is famous for its numerous Player Punches: expect to be forced into a heartrendingly difficult decision at least once per episode. Even outside of these decisions, the grim post-apocalyptic setting leaves ample room for tragedy.

All spoilers are unmarked in accordance with the Spoiler Policy!