Tear Jerker / Nausicaä of the Valley of the Wind 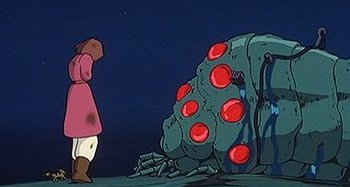 The scene that will make you angry at the whole human race.

Nausicaä of the Valley of the Wind is a story about life (but mostly death) in a post-apocalyptic wasteland. It's only natural that things get very sad very quickly.