Per Spoilers Off rule, all spoilers in this page are left unmarked. 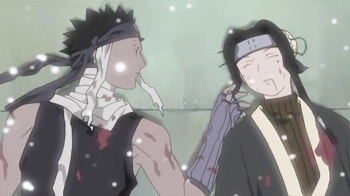 "I wish I could go to where you have gone...
How I wish I could join you there...Haku..."
"Your words cut deep. Deeper than any blades."
— Zabuza
Naruto is known as, among other things, one of the saddest manga there is. If someone asks you why, simply point them towards one of the following scenes.
Advertisement:
open/close all folders

Part I (Before the Time Skip)

Part II/Shippuden (After the Time Skip)

Kakashi Hiden
See Kakashi Hiden: Lightning in the Icy Sky
Shikamaru Hiden
See Shikamaru Hiden: A Cloud Drifting in Silent Darkness
The Last: Naruto the Movie
The last story of Naruto Uzumaki... is love.
See The Last: Naruto the Movie
Sakura Hiden
See Sakura Hiden: Thoughts of Love, Riding Upon a Spring Breeze
Konoha Hiden
See Konoha Hiden: The Perfect Day for a Wedding
Gaara Hiden
See Gaara Hiden: A Sandstorm Mirage
Akatsuki Hiden
See Akatsuki Hiden: Evil Flowers in Full Bloom
Naruto Gaiden: The Seventh Hokage and the Scarlet Spring Month
A spin-off miniseries about the next generation of ninja, the children of the Konoha 11. It focuses on Sarada Uchiha, who finds herself having questions about her family.
See Naruto Gaiden
Boruto: The Movie
A spin-off movie focusing on Boruto Uzumaki and his quest to surpass his father, the legendary hero and Seventh Hokage, Naruto.
See Boruto: Naruto the Movie
Boruto: Naruto Next Generation
A spin-off sequel focusing on Boruto Uzumaki that takes place before and after the events of Boruto: Naruto the Movie.
See Boruto

Movies and Other Media
Covers, Openings, Endings and Music
Meta