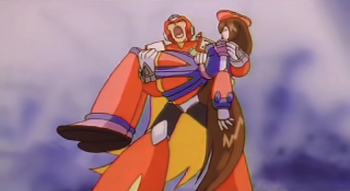 "What am I fighting for?!"
"I will not apologize... because this is the path we have chosen. Instead, I will shoulder this burden... your souls... the faces of the people I have killed."
—The thoughts of Zero in the Rockman X4 manga, just before he kills Colonel, knowing that Colonel's sister Iris will die as well due to the mechanical link they share as Reploid twin siblings.
Advertisement:

(Lyrics translated from Japanese): Oh, moonlight, illuminate my path! Illuminate for me the path I must take! Oh, moonlight, shine on me! Envelop me, who has lost the sun, with your light!