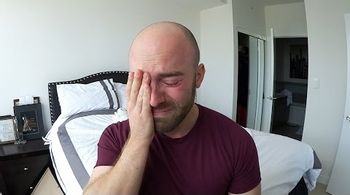 Matthew Santoro's videos are usually funny and lighthearted, but even they have their sad moments.