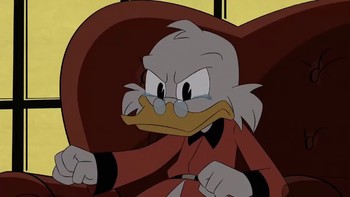 "Well, you've successfully pushed your family and everyone who ever cared about you away... again. I hope you're happy."
"I am."

Terror of the Terra-Firmians!
The House of Lucky Gander!
The Infernal Internship of Mark Beaks!
The Living Mummies of Toth-Ra!
The Impossible Summit of Mt. Neverrest!

The Missing Links of Moorshire!
McMystery At McDuck McManor!
The Spear of Selene!
Beware the B.U.D.D.Y System!
Jaw$
The Golden Lagoon of White Agony Plains!
Day of the Only Child!
From The Confidential Casefiles Of Agent 22
Who is Gizmoduck?!
The Other Bin of Scrooge McDuck!
Sky Pirates... In the Sky
The Secret(s) of Castle McDuck!
The Last Crash of the Sunchaser!
The Shadow War!