Tear Jerker / DuckTales the Movie: Treasure of the Lost Lamp 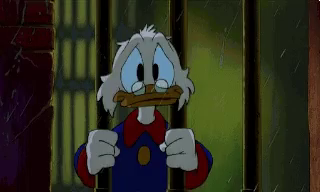