There have been so many iconic phrases from The X-Files, it needed a whole page to contain them all. 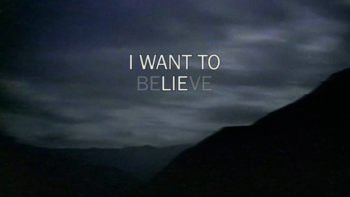 The final shot of The X-Files' title sequence always ends with the words "The Truth is Out There" against a stormy, dark blue sky. However, certain episodes have a different phrase to represent their storylines.