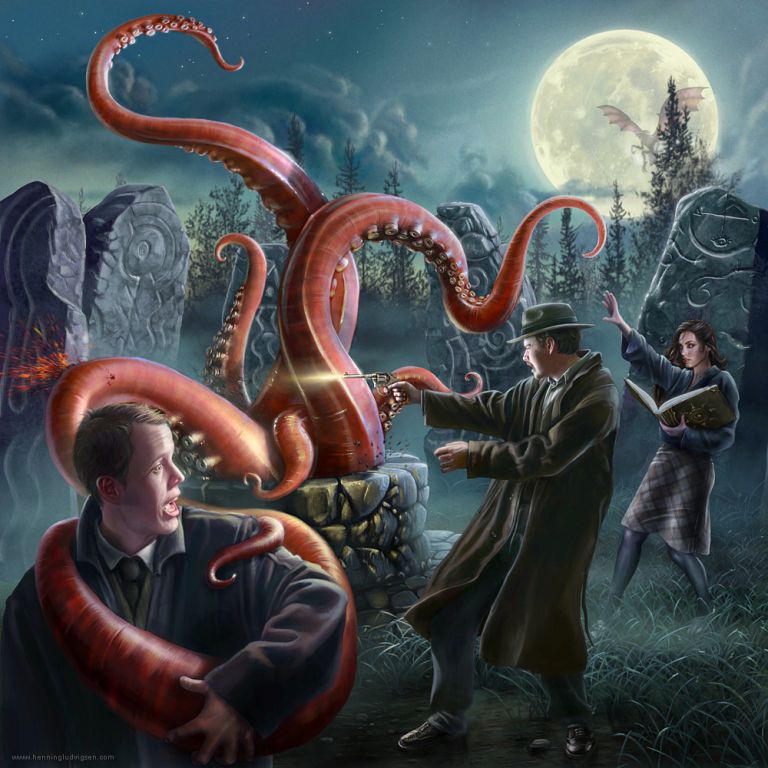 "840: Even if it would have immediately solved the last six adventures, I will not throw dynamite into every well we come across."
"The most merciful thing in the world, I think, is the inability of the human mind to correlate all its contents. We live on a placid island of ignorance in the midst of black seas of infinity, and it was not meant that we should voyage far..."
— H. P. Lovecraft, The Call of Cthulhu

One of the most famous Tabletop Games of all time, Chaosium's Call of Cthulhu combines the adventurism and teamwork of Dungeons & Dragons with the Lovecraftian Fiction setting of the Cthulhu Mythos. Your adventurers, or rather investigators, are dropped into scenarios right out of a Lovecraft story, and must keep their wits about them; the goal of every C.O.C. campaign is not so much to defeat the Enemy, but to survive Its horrendous onslaught while following the mystery out to its bitter — and usually grim — end.

Notable for introducing Sanity as a character stat — your characters actually risk having their minds blown apart, partially or completely (and sometimes even literally), by the events they encounter. As a result, the term "SAN check" has drifted out of the Cthulhu following and become a generally recognized metaphor among gaming circles. As characters learn more lore about the Cthulhu Mythos, their maximum Sanity shrinks — forcing players to choose between their characters being ignorant or crazy.

The defualt setting is the 1920s but there is also has variations for settings and time periods including:

, a Collectible Card Game of the same name loosely based on (and licensed by) Chaosium's aforementioned RPG, a movie done in the black-and-white style of the 1920s about Cthulhu, the Youtube series Calls for Cthulhu, or the original short story by H. P. Lovecraft that they are all named after.

The most famous campaign for the setting was Masks of Nyarlathotep which has been adapted into a radio play.