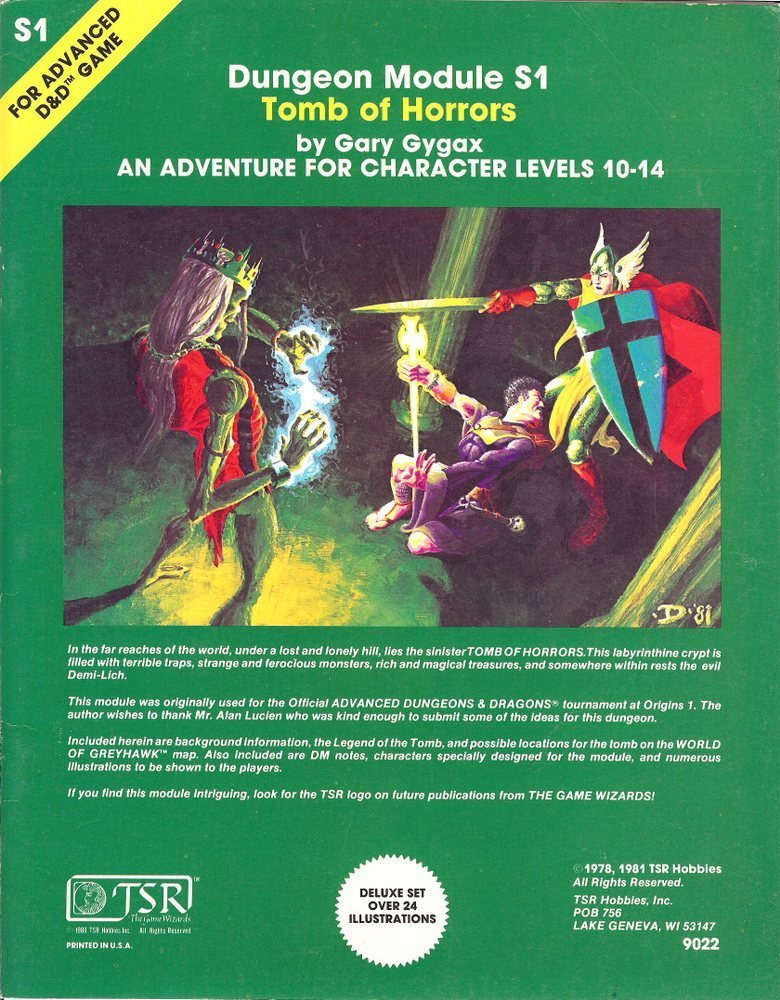 33 Years before Dark Souls, and MORE deadly
Tomb of Horrors is one of the all-time classic Dungeons & Dragons adventure modules. It is, in the true sense of the word, infamous for being one of the most devious and impossibly difficult adventures ever written. Anyone who has ever played this adventure has had characters die horribly in the Tomb.
—Darths & Droids, Search and Destroy

Tomb of Horrors is a module released for the original Dungeons & Dragons. In it, a group of adventurers travel to the titular tomb to fight the demilich Acererak and recover any loot found along the way. The only problem? The tomb is filled with dozens of deathtraps. Ridiculously hard to figure out and frustrating, Tomb of Horrors is one of the most infamous adventures for any campaign, and is called a "meat grinder" by many gamers for good reason.

The adventure's reputation is due primarily to its use in an early Dungeons & Dragons (now referred to as 'Original D&D') tournament, in which players were competing against other teams... not to beat the dungeon, but to see who could solve the most traps and puzzles before the (virtually certain) TPK. A few years later, it was published as one of Advanced Dungeons & Dragons (what is now called 'first edition AD&D') premade adventure 'modules' (albeit an adventure with a 'very high risk' disclaimer), S1: The Tomb of Horrors. Out of print for many years, it has been made available again as a PDF.

Twenty years later, an updated version for use with the D&D 3.5 ruleset was available as a free download from the Wizards of the Coast Web site

. (It can now be downloaded from here

.) This version has elicited strong controversy due to heavy reduction in the lethality, partly due to the differences in edition rules, primarily due to general Adaptation Decay; rather than a perfect replication under the 3.5 ruleset of the original super-lethal module, the official update is actually a standard, mostly-balanced dungeon crawl, aimed for level 9 characters. Not only are there few of the classic traps from the original left in, the Acecerak encountered at the dungeon's end is actually a CR12 "fake demilich construct" - the 'Demilich' monster had not undergone the same Adaptation Decay as the adventure itself, and the new designers felt gamers would not appreciate a Failure Is the Only Option dungeon.

The Tomb of Horrors is located in the Greyhawk setting, but can be adapted to almost any other setting with minimum fuss.

There are two versions in Fourth Edition. One is merely a conversion of the old tomb. The other a rather long campaign that is a sequel to Cordell's Return to the Tomb of Horrors, taking place over the course of four separate "tombs" (a Feywild graveyard, the city of Moil within the Shadowfell, a city built around the ruins of the original Tomb, and finally Nerull's tomb within the plane of Pluton) as Acererak works to ascend to godhood and beyond.

A Fifth Edition version was released on April 4, 2017 in the Tales from the Yawning Portal adventure collection, alongside 5th Edition versions of the classic adventures Against the Giants, Dead in Thay, Forge of Fury, Hidden Shrine of Tamoachan, Sunless Citadel, and White Plume Mountain. While not as lethal as the original, owing to rule changes, it's still quite deadly, and the Acererak at the end is a proper demilich again with all the terrifying powers you'd expect him to have.note If anything he's worse than before, as he now has access to additional lair and legendary actions, whereas before all he'd do was steal souls.

One of the storyline adventure modules to be released for 5th Edition concerns a version of the Tomb that Acererak constructed in the Forgotten Realms, called the Tomb of Annihilation, and concerns a strange curse: those who have been resurrected before slowly waste away to die again, while attempts to resurrect people completely fail. Consultation for the story of this particular module was done by Pendleton Ward.

Completely unrelated to the similar sounding Tome of Horrors, a series of Monster Manual-type books from Frog God Games which are dedicated to introducing new monsters and select old monsters from 1st and 2nd Edition D&D to 3.x Edition D&D, Pathfinder, and Swords & Wizardry.

Since Everything Is Trying to Kill You inside the tomb, many of the tropes below will spoil its traps.

Tomb of Horrors provide examples of: