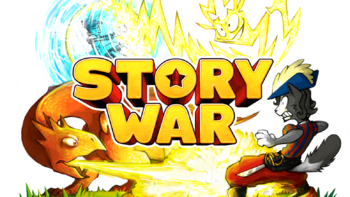 . The object of the game is to defeat the opposing team by telling a story using the cards. There are three types of cards: Warriors, Items and Battlefield. Each turn represents one battle between two teams of players. The setting is defined by a randomly drawn Battlefield card. Players then look at the Warrior cards and Item cards in their hands and try to come up with a clever strategy. Once every player has played their Warrior cards face-down, everyone flips their cards over simultaneously. Then players must quickly describe, in an open discussion, how their team would defeat the opposing team. Each battle is moderated by a judge that rotates every turn so the shared pop cultural context of everyone in the room is very important!

The game started raising funds on Kickstarter; the goal being a modest $20,000 but quickly reached that goal halfway through the fundraising and eventually raised over $360,000.

The game itself can be found here

. There is an animation short