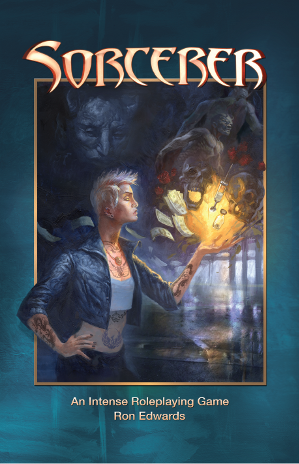 "What will you do to get what you want?"
Advertisement:

Sorcerer: An Intense Roleplaying Game is an indie Tabletop RPG published by Ron Edwards in 2001. The players take the role of the eponymous sorcerers in a modern world where dark powers exist to make bargains with. The objective of the game is to create a fluid, dramatic narrative about ambitious people doing terrible and awesome things to reach their goals. It has little in the way of pre-published splat and setting material and instead gives each group the tools they need to create their own world and to use it as a backdrop for exploring the Central Theme of "humanity" (however they define it in detail).

Three expansions have been published by Edwards: Sorcerer & Sword (facilitates a more traditional Sword & Sorcery campaign but with the same focus on characters), The Sorcerer's Soul (greatly expands the mechanics associated with the Humanity stat), and Sex & Sorcery (delves into the topics of gender and sexuality).

Compare Dogs in the Vineyard and My Life with Master.