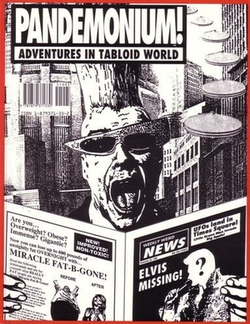 A little-known Tabletop RPG from the early 1993, Pandemonium! took us outside our nice comfortable world...

All those things you read about supermarket tabloids? Backwoods lake monsters, alien abductions, Elvis sightings, they're all true. The players control Paranormal Investigators, or rather reporters for one such rag, The Weekly Weird News, after attaining Enlightenment. Besides simply being able to accept all the bizarre events most people write off as hooey, becoming Enlightened allows people access to unusual abilities like walking through walls and clairvoyance, as well as being able to call up the abilities of who they were in past lives. With these abilities the players are sent to investigate everything from bigfoot sightings to secret conspiracies.

Sadly the game found little support from the gaming public and was shuttered after the release of the rulebook and a single booklet containing premade adventures. Not to be confused with the 1982 Movie of the same name, nor the PlayStation 1 series of games of the same title, or the Books of Pandemonium. Or, you know, that place...